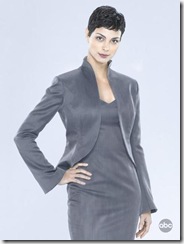 Badler will join the series for its second season premiere. Her recurring guest-starring role will be just the first move in a second season that will, according to today’s press release, feature “more character and lizard reveals, more details about the Vs’ mythology – in which Badler will play an important role — and more action and more plot twists.”