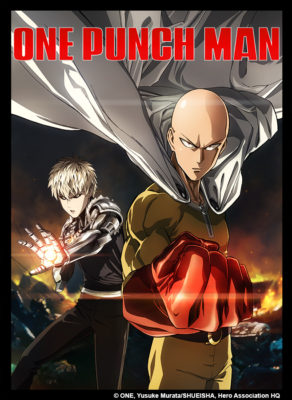 Will he ever find a foe who can alleviate his boredom and give him the fight he’s looking for? You can find out  when the VIZ Media series premieres on Adult Swim’s Toonami next week.

Action Anime Series About A Superhero With A Knockout Punch, Based On Smash Hit Manga Title, Premieres On North American TV Later This Month!!

The action adventure about an uncanny superhero with a knockout punch is scheduled to premiere on July 16th (time to be announced), with future episodes set to air each Saturday. Toonami is the anime programming block on Adult Swim, Turner’s network offering original and acquired animated and live-action series for young adults.

“One-Punch Man is a one of a kind show and we’re excited to have it join our Toonami line-up,” said Jason DeMarco, senior vice president and creative director, on-air for Adult Swim. “We know our viewers have been hoping this would happen for a while, and we’re thrilled to have been able to make it happen!”

ONE-PUNCH MAN is based on the bestselling manga series (the latest chapters serialized in Weekly Shonen Jump, and graphic novels published by VIZ Media; rated ‘T for Teens), created by writer ONE and artist Yusuke Murata. The anime series was animated by the renowned Japanese studio, Madhouse, and helmed by famed anime director, Shingo Natsume, (Space Dandy, Fullmetal Alchemist: The Sacred Star of Milos), and features character designs by Chikashi Kubota (From the New World, Robotics:notes). For its broadcast premiere on Toonami, ONE-PUNCH MAN will feature a notable cast of English voice actors including Max Mittelman (as Saitama), Zach Aguilar (as Genos), Robbie Daymond (as Mumen Rider) and Erik Kimerer (as Speed-o’-Sound Sonic).

“With its compelling characters, high-energy animation and contemporary spin on the classic superhero premise, ONE-PUNCH MAN is a bombastic action tale unlike any anime series that has come before,” says Charlene Ingram, Senior Marketing Manager, Animation. “Don’t miss the premiere on Adult Swim later this month!”

In ONE-PUNCH MAN, Saitama only became a hero for fun, but after three years of “special” training, he finds that he can beat even the mightiest opponents with a single punch. Though he faces new enemies every day, it turns out being devastatingly powerful is actually kind of a bore. Can a hero be too strong?

VIZ Media is the official North American distributor of the ONE-PUNCH MAN anime and manga properties and holds the digital and print publishing rights as well as broadcast rights, digital streaming rights, home video rights and master merchandising rights to the series.

For additional information on ONE-PUNCH MAN and other anime and manga titles distributed and published by VIZ Media, please visit www.VIZ.com.