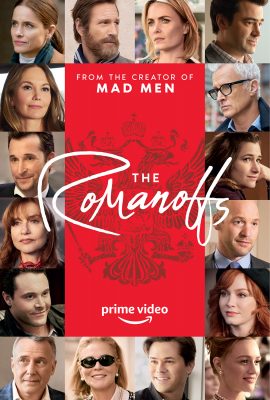 Santa Monica, CA – September 12, 2018 – Today, Amazon Prime Video released the key art and official series trailer for the highly anticipated original contemporary anthology series, The Romanoffs, set to premiere on Friday, October 12 with new episodes released weekly, on Fridays. This is the first anthology series for Amazon Prime Video that will roll out on a weekly basis. The Romanoffs will be available initially in the original version in over 200 countries and territories, with dubbed foreign language versions coming in early 2019.

Loglines for the first two installments below:
“The Violet Hour” — Premieres on Friday, October 12
Set in Paris, an ancestral home holds the key to a family’s future.
Starring Aaron Eckhart, Marthe Keller, Inès Melab and Louise Bourgoin in “The Violet Hour.”

About Prime Video
Prime Video is a premium subscription streaming service that offers customers an unmatched collection of digital videos—all with the ease of finding what they love to watch in one place.

? Included with Prime: Watch thousands of popular movies and TV shows, including our award-winning Prime Originals such as The Grand Tour, The Marvelous Mrs. Maisel and Sneaky Pete, Academy Award-winning Manchester by the Sea and The Salesman and Academy Award-nominated The Big Sick, exclusives, live sports and licensed and self-published content available in more than 240 countries and territories worldwide.

? Watch more with Prime Video Channels: Prime members can add 160+ channels like HBO, SHOWTIME, STARZ, CBS All Access, Cinemax, and more—no extra apps to download, and no cable required. Only pay for the ones you want, and cancel anytime. View the full list of channels available at amazon.com/channels.

? Rent or Buy: Enjoy hundreds of thousands of titles, including new-release movies and entire seasons of current TV shows, available for all Amazon customers to rent or buy.

? Instant access: Watch where and when you want with the Prime Video app on your smart TV, mobile device, Fire TV, Fire tablet, Apple TV, or from the web. For a complete list of compatible devices, visit amazon.com/howtostream.

? Enhanced experiences: Make the most of every viewing with 4K Ultra HD- and High Dynamic Range (HDR)-compatible content. Go behind the scenes of your favorite movies and TV shows with exclusive X-Ray access, powered by IMDb. Save it for later with select mobile downloads for offline viewing.

In addition to Prime Video, the Prime membership includes unlimited fast free shipping options across all categories available on Amazon, more than two million songs and thousands of playlists and stations with Prime Music, secure photo storage with Prime Photos, unlimited reading with Prime Reading, unlimited access to a digital audiobook catalogue with Audible Channels for Prime, a rotating selection of free digital games and in-game loot with Twitch Prime, early access to select Lightning Deals, exclusive access and discounts to select items, and more. To sign-up for Prime or to find out more visit: amazon.com/prime.