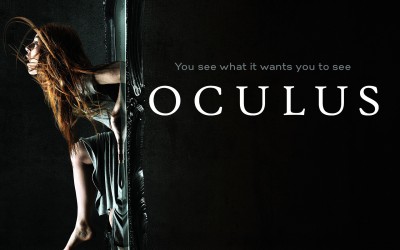 Whenever I see the title of the new film horror flick Oculus, my first thought is always – “Wow, they made a movie about the Virtual Reality Video Game makers, should be interesting.” My second thought is, what is the plural of Oculus? Oculi? I didn’t know what to expect when walking into this movie, but it did star two of my favorite actresses Battlestar Galactica’s Katee Sackhoff and former Doctor Who companion Karen Gillan. How did it go wrong so fast?

The premise is a sound one, when brother/sister Tim (Brenton Thwaites) and Kaylie (Karen Gillan) Russell were kids their parents Marie and Alan went a psycho. As they say in the Scream films – “We all go a little crazy sometimes.” She believes that their nuttiness was the result of an cursed antique mirror. Years later Kaylie is obsessed with clearing her family name and getting revenge on the evil spirits that drove her family crazy. He eventually finds the mirror at an old auction house and with her brother’s help seeks to recreate the fateful night. To help prove her theory she sets up the entire house with web cams, audio and more.

She uses the camera on her cell phone to help them determine what’s real and not, and she has her boyfriend call them every hour, as well as alarm clocks. It is a well thought out plan, but also serves as one of the film’s fatal flaws. After establishing that looking through the cell phone allows Kaylie and the audience to view what’s real and not, the film totally ignores the plot device in the 3rd act, there’s a weird moment where someone may or may not be dead, but the film never clearly establishes it. Is there an evil spirit or not? We never really find out. The inconsistencies and ambiguities would have been maddening if I actually cared about these people. 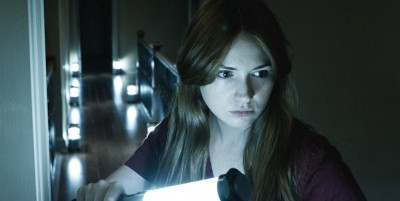 The pacing is so plodding that whenever I felt myself dozing off one of those damn alarm clocks would go off. It is as if the Director knew this film was boring. There is zero chemistry between any of the actors on camera and I found Sachoff’s ginger locks distracting.  The story structure also didn’t help as it kept jumping from present day to the past and then merged the two together to form some sort of weird tapestry that never really meshed.

Directed by former Bowie, MD resident Mike Flanagan, Oculus makes the mistake of taking itself way too freaking seriously. Horror films should be fun and deliver scares; Oculus is a plodding mess that doesn’t even follow its own internal logic on a consistent basis. Flanagan does a nice job of setting the mood and tone of the piece, but he doesn’t get much out of his actors and the set decoration is not very interesting to look at.