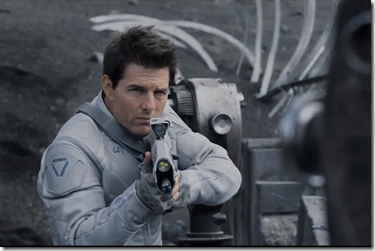 Joseph Kosinski’s Oblivion is a big movie that takes some familiar ideas and combines and reshapes them in interesting ways. It is a film with breathtaking visuals, epic themes and intimate moments in combination with some unique action sequences. It is also a film that requires its audience to pay attention – at, more so than most end of the world movies.

Jack Harper (Tom Cruise) is essentially a maintenance man in a post-apocalyptic world – one caused by a war with an invading alien race – who works partner Victoria (Andrea Riseborough) to maintain drones that protect devices that are siphoning up the oceans to provide fusion power for the human race to relocate to Titan, one of Jupiter’s moons, from the surviving aliens – called ‘Scavs.’ The remnants of humanity, we are told, are waiting on board a giant craft called the Tet – and in two weeks, the couple’s mission will be over.

A series of dreams causes Jack to wonder about his life – dreams that seem to be from before the war, some sixty years ago and feature a woman (Olga Kurylenko) who seems very familiar. Then an antiquated space craft crashes in his zone and the only survivor is the woman from his dreams.

Kosinski, who also wrote Oblivion (adapted it from a graphic novel he hadn’t quite completed, actually), has created a world of awe-inspiring visuals – many of which were shot in-camera – intriguing characters and a story that takes familiar elements and twists them in upon themselves.

Some of the most impressive visuals are the views from the Sky Tower where Jack and Victoria live – none of which are CG (Kosinski filmed views from Hawaii’s Haleakal? Volcano and projected them on giant screens around the Sky tower set, which was also a fully practical set – at least inside). The Bubbleship (a cross between a helicopter and a fighter jet) Jack flies whilst making his rounds was also built, so it has a satisfying heft to it.

Oblivion opens with a four-minute narration that sets the scene for the film but it’s done while Jack is working, so there’s always something going on onscreen to keeping it from feeling a massive infodump. As Kosinski develops his Jack/Victoria team, we learn more and more about how they live and what their work entails. It’s all fascinating stuff, and none of it is extraneous. When the pace picks up and revelations come, it all comes together ways that are both familiar and new.

Slowly, we begin to realize that things are what they appear to be – first through the couples’ supervisor, Sally (Melissa Leo), who keeps asking if they are an effective team, and then through the introduction of a few very key characters that put a dramatic spin on the Firesign Theater’s album title, Everything You Know is Wrong.

Cruise, Riseborough and Kurylenko are excellent (whatever else you say about Cruise, he never phones in a performance) as the main characters – and supporting characters are given far more weight than screen time through the work of Morgan Freeman and Nickolaj Coster-Waldau.

Kosinski may take a bit more time setting up the film’s many twists and turns – and the movie will lose you if you’re not paying close attention (the devil is in the details on both sides of the camera) – but the film’s complexity and beauty (superb cinematography by Claudio Miranda – Oscar®-winner for Life of Pi) make it well worth your time.

In the end, Oblivion is a film that is both derivative and fresh. It plays with themes like identity and memory. It matches its writer/director’s ambitions more often than not and entertains like gangbusters.