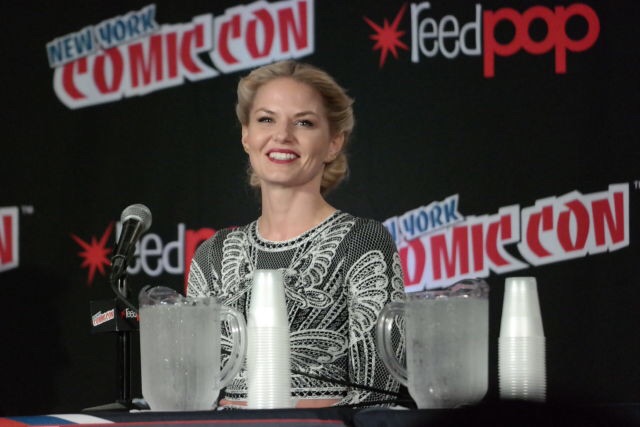 The fans came out in full force to support their favorite fair tale show and catch a glimpse of the one and only Dark Swan at this years New York Comic Con panel for ABC’s hit series Once Upon a Time.

In typical fashion, Adam and Eddy were pretty vague on the specifics but here’s what we do know.

The back story of the Dark One will finally be revealed. We’re going to meet previous Dark One’s and learn the mythology behind the most powerful magic wreaking havoc on our fairy tale friends.

Brace yourselves. Emma’s crushing someone’s heart and it’s coming very soon. I don’t know if she is literally crushing it to dust or more hurting someone she loves but I’m kinda hoping for dust. I know that’s mean but come on admit it, you wanna see her do it too!

Remember that locked door Emma didn’t want Hook anywhere near? Well Hook, Robin and Regina will team up to find out what Emma’s been hiding behind it.

An unlikely alliance will for between Regina and Hook when they partner up for an adventure of their own. The snark and sass is going to be delicious I’m sure!

For all the Hook fans out there the show is going to dig a little deeper into Killan’s past with the introduction of his father. They are currently casting for both Hook’s father and a young Killian.

Even though We got to see a budding romance for Henry in Camelot and then again in Storybrooke with Violet, according to Adam and Eddy Henry’s love life is about to take a heartbreaking turn. Poor kid. It fun while it lasted!

While circumstances have taken a dark turn for our friends in Storybrooke so far in Season 5a, when asked to describe 5b in one word creator Eddy Kitsis simply said “HELL”. You might might want your blankie and a good bottle of alcohol on hand just in case.

It’s true that Henry will forever be her kryptonite, it looks like Emma will try to take advantage of her relationships with both Hook and Henry to further her plans involving Excalibur.

This is probably my favorite tease of the panel. Red and Mulan will make their highly anticipated return along side Merida for an adventure of their own during a two hour special set to air in November. A&E told us they will explain what the women have been up to.

Once Upon a Time airs Sundays at 8 p.m. ET on ABC.