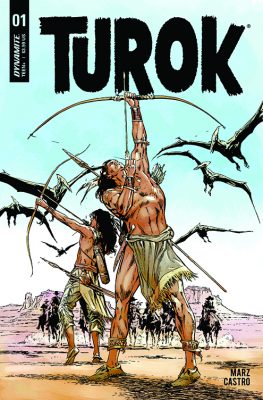 In this new series, Turok pursues his kidnapped brother… in the Badlands of the Old West (?)!

Turok #1 will be solicited in Diamond Comic Distributors’ November 2018 Preview and slated for release in January 2019. 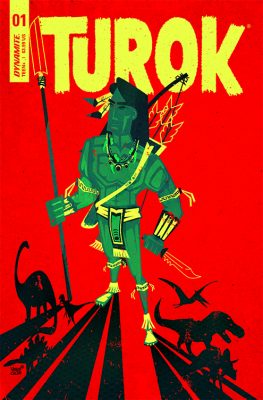 All New Series to Launch January 2019

In this new series from Dynamite Entertainment, Turok pursues his kidnapped brother… in the Badlands of the Old West! In the waning days of the Indian Wars, the U.S. cavalry has captured Andar, but Turok will stop at nothing to rescue him. But that quest will lead Turok, Andar, and even the soldiers to a strange, lost land inhabited by creatures beyond their imaginations. This is Turok as you’ve never seen him before … and Turok as you’ve always seen him!

“I wanted to build my Turok story by going back to the original version, not so much in terms of the specifics, but in terms of the spirit. We’re not imitating anything that’s come before, but we’re definitely trying to capture the feel of what made those stories cool,” said author Ron Marz. “We have a Native American and his brother, we have a lost land inhabited by dinosaurs and other time-lost denizens. But this is not a specific Turok we have seen before, because we’re setting this in the 1880s, in the waning days of the Indian Wars in the Old West.”

“We’ve seen a few variations on Turok over the years, but what Ron’s doing here is both true to the roots of the character while threading together an even larger narrative which I think will be satisfying to both Turok fans and new readers alike. And based on what Roberto’s done so far, I think readers are in for a treat,” said senior editor Matt Idelson. 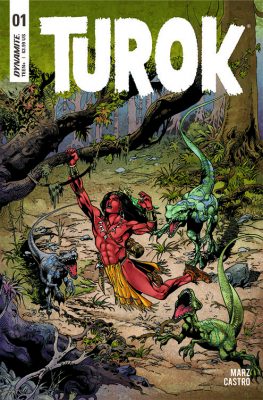 “Ron is one of the most versatile writers in the industry, and we know he will deliver stories that fans will love. Roberto’s ability to draw barbarian adventures is fantastic! Having them on Turok is a perfect blend of creative and character,” said Nick Barrucci, CEO and Publisher of Dynamite Entertainment. “The talent on this book is massive and readers are going to love what’s in store. Did I mention we have dinosaurs?”