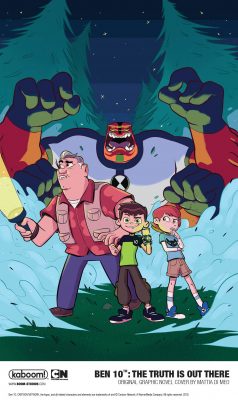 After a week of what Grandpa Max refers to as ‘alien shenanigans,’ he decides to take Ben and Gwen to his favorite spot in the country for some quality family time – hiking, fishing, enjoying the spectacular vistas.

Ben and Gwen, however, are bored – until…

Ben 10™: The Truth is Out There is the new kaboom! graphic novel (in partnership with Cartoon Network) from CB Lee and artist Lidan Chen. 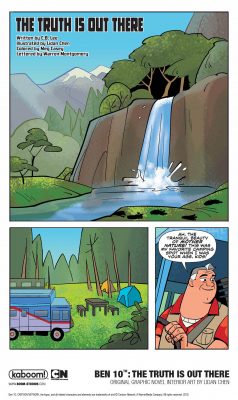 LOS ANGELES, CA (November 13, 2018) – BOOM! Studios and Cartoon Network today unveiled a first look at BEN 10™: THE TRUTH IS OUT THERE, an all-new original graphic novel in stores March 2019 by Rainbow Award-winning writer CB Lee (Not Your Sidekick) and artist Lidan Chen. Based on Cartoon Network’s hit series, this is the first in a series of original graphic novels that will anchor BOOM! Studios’ publishing program for the global franchise. 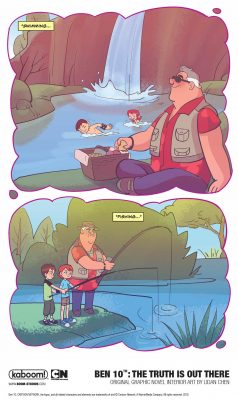 Ben 10™ introduces fun loving, 10-year-old, Ben Tennyson, his cousin Gwen and Grandpa Max, as they travel the country during summer vacation. Once Ben finds the Omnitrix, a mysterious watch that transforms him into 10 different heroic aliens, a world of extraterrestrial superpowers opens up to him. Ben 10™ is produced by Cartoon Network Studios and created and executive produced by Man of Action Entertainment. 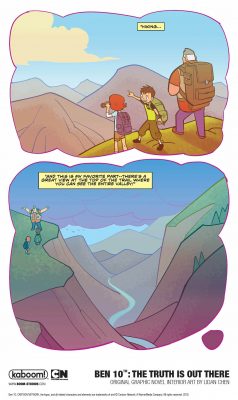 BEN 10™: THE TRUTH IS OUT THERE features a cover by artist Mattia Di Meo (Adventure Time). 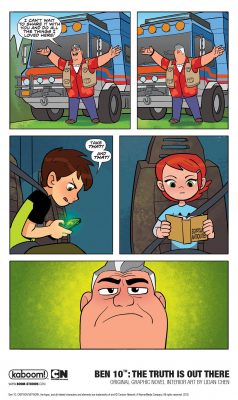 “We’re thrilled to kick off our big plans for Ben, Gwen, and Grandpa Max with BEN 10™: THE TRUTH IS OUT THERE,” said Cameron Chittock, Editor, BOOM! Studios. “CB and Lidan have captured the voice and spirit of this beloved show with an exciting new adventure that explores the power of family and uncovers the secret behind the most famous monster of all.” 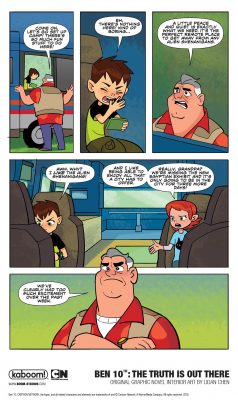 BEN 10™: THE TRUTH IS OUT THERE is the latest release from BOOM! Studios’ award-winning KaBOOM! imprint, home to comics for middle grade and younger readers including licensed series such as Adventure Time, Steven Universe, Peanuts, and Garfield, along with original series like Mega Princess by Kelly Thompson and Brianne Drouhard, Bodie Troll by Jay Fosgitt, Ruinworld by Derek Laufman, and The Deep by Tom Taylor and James Brouwer. 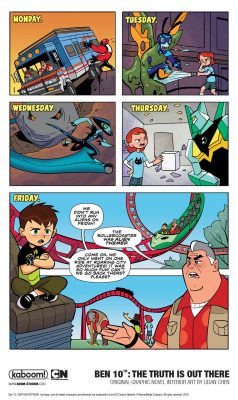 Print copies of BEN 10™: THE TRUTH IS OUT THERE will be available for sale on March 20th at local comic book shops (use comicshoplocator.com to find the nearest one), on March 26th at bookstores and the BOOM! Studios webstore. Digital copies can be purchased from content providers, including comiXology, iBooks, Google Play, and the BOOM! Studios app. 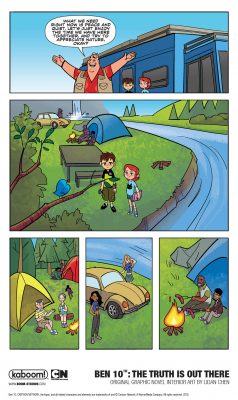 For continuing news on BEN 10™ and more from BOOM! Studios, stay tuned to www.boom-studios.com and follow @boomstudios on Twitter. 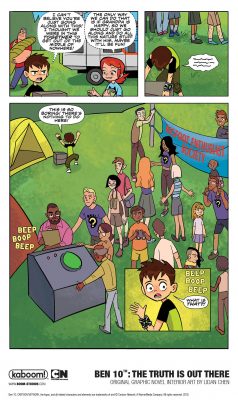