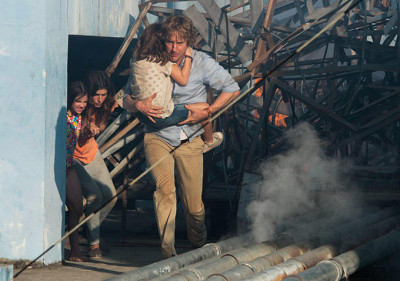 An American family moving to another country for a new job find themselves in the middle of a coup – where foreigners are being executed on sight – and having to fight to survive.

No Escape is a better than average thriller with a rare dramatic turn for Owen Wilson – who shines as the harried father struggling to save his family.

We open on a political meeting in an Asian country. A taster makes sure the Prime Minister’s drink isn’t poisoned before handing the drinks to the politicians and returns to his post. A shot rings out – the Prime Minister is dead. Havoc reigns.

Cut to seventeen hours earlier and… We meet Jack Dwyer (Wilson) and his family – wife Annie (Lake Bell), daughters Lucy (Sterling Jerins) and Beeze (Claire Geare) – on a plane headed for their new home. The kids are complaining about having to leave home, but Annie is supportive of Jack – it seems that he was lucky to find this job in middle management at a company that is supposed to be helping the country provide better drinking water.

Beeze drops her teddy bear and a grizzled gentleman (Pierce Brosnan) retrieves it for her. When the plane lands and they don’t see the car that’s supposed to pick them up, the grizzled fellow – who has introduced himself as Hammond – hustles them to his ride: a minibus bearing a painting of Kenny Rogers on the sides. Hammond introduces the driver as Kenny Rogers (Sahajak Boonthanakit) – they couldn’t pronounce his real name and they’re off to their hotel.

No sooner than the Dwyers begin to settle in, explosions and gunfire startle them. When Jack looks outside, he sees people with guns – using them. Meanwhile, before the action, Lucy has gone down to the pool and now Jack has to get her, get back to the suite and get his family out of the hotel. 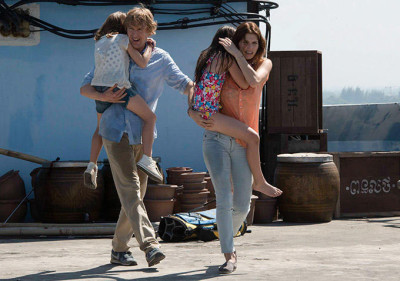 Once again, Hammond is there to help save them – though Beeze loses her teddy bear and gets upset when Jack can’t get it back. Throughout the next few hours, the girls create all kinds of problems for Jack and Annie – they’re kids; they have no conception of what’s going on. Without meaning to, they put the family in danger. It’s far too real to be at all comfortable.

Add to the confusion a startling revelation from Hammond and suddenly what’s happening takes on a shocking new meaning. Even better, dramatically but not for the Dwyers, Jack is now a specific target – and the movie is saying stuff (pointedly, but definitely).

As the threat level intensifies, we are drawn more tightly into the plight of the Dwyers. Wilson and Bell do standout work as the parents, while Jerins and Geare are so perfectly children that you can’t see them acting.

Brosnan takes his easy charm and affability to a darker place than we’ve seen in a while and  Boonthanakit shows a fair bit of range in what is a pretty minor role.

Director Jack Erick Dowdle (Quarantine, As Above, So Below) – who co-wrote with brother Drew Dowdle – handles the action extremely well. The violence (which gets pretty extreme in places) feels messy and real – no poetry of any kind here. No Escape is more than gritty, it’s biting and savage.

Wilson seldom gets to show his dramatic chops and really steps up here – he begins in semi-comic mode on the plane and moves to an opposite extreme quickly and believably. He nails the action sequences that Dowdle requires of him. Though better known for her comedy stuff, Bell has a fair bit of experience with drama and action and really works well with Wilson.

Both Jerins (World War Z, The Conjuring) and Geare (24: Day Eight, Inception) are perfect as the bewildered Lucy and Beeze. There are no false notes to their performances, so the audience, at times, will want Jack or Annie to strangle them as much as they want to protect them.

No Escape is a mean, nasty film that is mostly savage and relentless. It’s also very, very good.