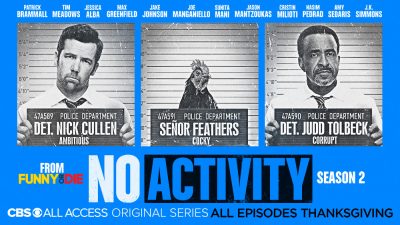 Nov. 12, 2018 – CBS All Access, CBS’ digital subscription video on-demand and live streaming service, today revealed the official season two trailer and key art for its original comedy series, NO ACTIVITY. All episodes of the series’ second season will be available to stream on Thursday, Nov. 22, exclusively for CBS All Access subscribers. This marks the first time CBS All Access has released an entire season of an original series at once.

NO ACTIVITY celebrates the mundane in what should be a high-stakes operation. Season two finds us back in Car 27 with SDPD Detectives Cullen and Tolbeck as they stake out the seedy underbelly of a cockfighting ring. Meanwhile, the SDPD is rocked by a massive corruption scandal, and the culprit might be close to home.