On May 26th, Warner Brothers released the complete 4th season of the hit TNT series The Closer onto DVD. 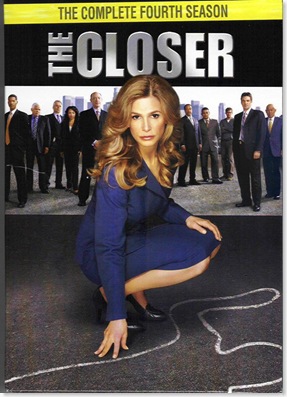 The Golden Globe award winning series stars Kyra Sedgwick as Deputy Police Chief Brenda Johnson who runs the Priority Homicide Division of the LAPD. Johnson has an unorthodox style, she couples with an innate ability to read people and obtain confessions all of which makes it possible for this Deputy Police Chief and her team to solve the city’s toughest, most sensitive cases.

Along with the usual hard hitting action and police drama, season 4 of The Closer had some vital changes going on in the storylines of the characters. The change that seemed to divide fans of the show the most was the marriage of Brenda and FBI Special Agent Fritz Howard (played by Jon Tenney), which left many loyal viewers wondering if The Closer had ‘jumped the shark’. Since only the progression of season 5 can  answer that question, let’s take a look at what the DVD has to offer regarding season 4.

Season 4 found Deputy Police Chief Brenda Johnson and her team coming under the gun of an ambitious news reporter’s unflattering tell-all which marked the end of the PHD unit even amid the successful solving of some very brutal and dangerous cases. But Brenda is not one to be counted out and in the episode Time Bomb, she and her team, reunite as the newly created Major Crimes Division with expanded jurisdiction, find themselves uncovering a murder plot by a group of teens who see humans as a plague on the earth. When a member of the terrorist teen group dies of an overdose during interrogation the clock is ticking for the MCD to stop the carnage before it’s too late.

While Season 4 of the Closer has some uneven pacing in episodes, it has plenty of very intense storylines and intriguing regular and guest characters to offer the viewer. The DVD itself comes with some high quality special features.

Bonus Features on the DVD set include:

A “Day in the Life” of a Homicide Detective: – An engrossing featurette hosted by actor Corey Reynolds (Det. Sgt. David Gabriel) that spotlights Reynolds as he rides along with an LAPD detective.

Catching a Lie – A compelling featurette that teaches viewers how interrogators know a suspect is telling a lie.  The FBI as well as other highly trained interrogators are taught unique and specific ways to catch a potential suspect in a lie. The technique and mannerisms are so precise that the results are almost identical to those of an actual lie detector test. Viewers visit with an actual member of the FBI as they discuss what to look for and how one can spot tell-tale signs.

The packaging of the 4 disc series is solid and the discs have an ease of access that helps to protect them and reduces wear and tear on them. Rosemary Markson, WHV Vice President, TV and Special Interest Marketing had this to say about The Complete 4th Season of The Closer:

“When a series earns major award nominations and wins for each season since its inception, you know you’ve got a rare and exceptional television program on your hands. That is consistently the case with The Closer. We feel privileged to be associated with this remarkable show. Kyra Sedgwick is dazzling in her role as Deputy Police Chief Brenda Leigh Johnson.  Her outstanding performance combined with the show’s powerful story lines and brilliant production is what makes this a real stand-out police drama, and we are pleased to offer it to consumers.”

Check out this video clip of season 4 of The Closer. 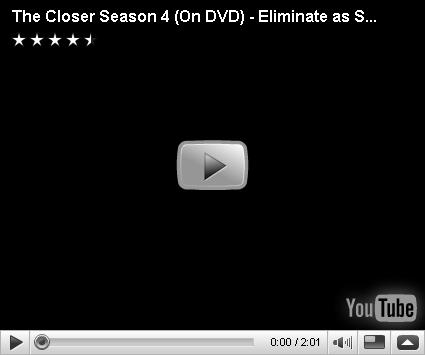 One thought on “New On DVD: The Closer The Complete 4th Season”