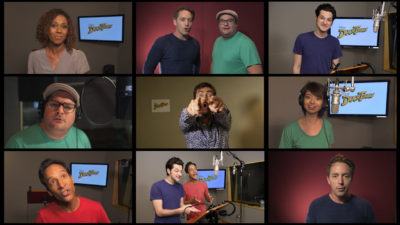 There’s a Doctor in the Duck Tales House – and Abed, an SNL cast member and more.

DUCKBURG – Top-billed actors will bring the beloved characters of McDuck Manor to life in the all-new animated comedy series “DuckTales,” premiering in summer 2017 on Disney XD channels around the world. Leading the quack pack on globe-trotting adventures are David Tennant as Scrooge McDuck; Danny Pudi, Ben Schwartz and Bobby Moynihan as the voices of mischief-making Huey, Dewey and Louie, respectively; Beck Bennett as Launchpad McQuack; Toks Olagundoye as Mrs. Beakley; and Kate Micucci as Webby Vanderquack. The cast was revealed today in a video of the actors singing a rendition of the original “DuckTales” theme song.