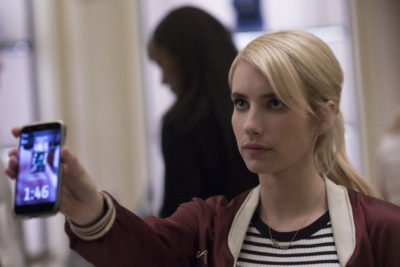 It does not go well.

It begins semi-innocently enough – Vee (Emma Roberts) is shocked when her best friend, the considerably more outgoing cheerleader Sydney (Emily Meade) – moons the crowd at a football game. Even for Sydney, that’s out there.

At a party, later, Vee learns that Syd is playing a game called NERVE – a game in which you can either be a Player or a Watcher. Players accept dares and, if they complete them, they win cash. The cash comes from the Watchers, who pay to watch the Players.

There are three rules:

The result is a more democratic Hunger Games whose volunteers really are.

When Syd goads Vee into taking some risks with her life, Vee decides to become a Player – not what Syd intended, but we get the impression that she’s not the clever girl that Vee (allegedly) is. 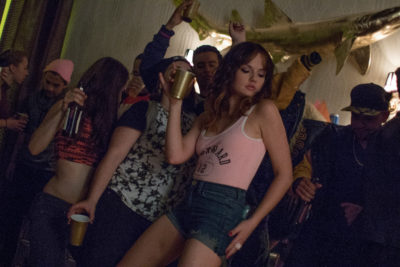 Her first dare is to kiss a random guy for five seconds – which is how she meets Ian (Dave Franco). Then the two are dared to go into the city together – followed by a dare to try on some (really) expensive clothes in a (really) exclusive store.

The ante is upped when they are dared to leave the store – but their clothes have mysteriously vanished from the store’s changing rooms.

Meanwhile, Syd and a bunch of people at the party are watching in disbelief as Vee climbs the rankings in the game.

As the dares become increasingly more dangerous (we see another competitor lie flat on a subway tack just before the train roars by above him), Syd falls behind Vee and unwisely tries to up her game.

At home, Vee’s mom, Nancy (Juliette Lewis), is shocked when money starts appearing in the bank account she shares with Vee. An early sequence in the movie establishes that if Nancy isn’t a helicopter mom, she’s only a rotor shy.

Directed by Henry Joost and Ariel Schulman (the team from Catfish) from a script by Jessica Sharzer (American Horror Story, TV’s upcoming Dirty Dancing), Nerve takes a few minutes to introduce Vee, Tommy, Sydney and Nancy then steps up the pace to frenetic and pretty much stays there ‘til the closing credits. 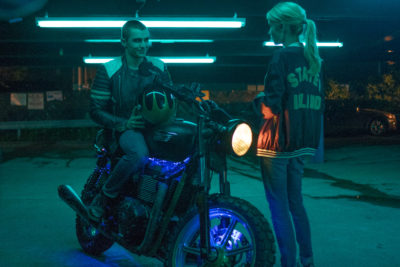 Aside from the obvious idea that the internet can be a very dangerous place, Nerve is about the power of anonymity – the communications between the Voice who issues the dares and the Watchers who vote on what those dares should be are encrypted.

In theory, if the majority votes on a dare to kill someone, there’s no way to trace the decision back to people who made it.

As the night wears on and Vee’s (and Syd’s) dares escalate, there is the possibility of real danger. And Ian is a cautionary tale on what happens if you break Rule #3.

Although the premise seems credible enough, given the current state of technology, there’s less thought given to the technical side of things – and when there’s time given it, it’s yet another attempt to make typing sexy (which is helped by one of the hackers we being played by OITNB’s Samira Wiley).

But mostly, Nerve is an exercise in adrenaline – short scenes, rapid cuts, crisp (and usually neon) lighting and a thumping electronic score.

The film’s conclusion is both welcome and ironically nasty – but you’ll have to see what that means by seeing the movie. Let’s just say that not everything (or everyone) is what it/they seem. And that makes for a real rush of a movie and a curiously satisfying resolution.