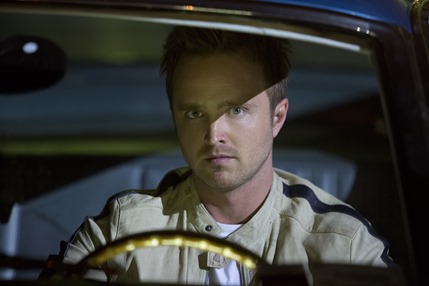 There’s not a lot you really need to know about Need For Speed except that what little CGI there might be in the movie, none of it is in the stuntwork. The racing sequences are outstanding – and practical (which is where the ‘old school’ comes in). Oh, and there’s actually a plot and a lot of good actors doing good work.

Need For Speed centers on street racer and mechanic extraordinaire Tobey Marshall (Aaron Paul). Unlike the more adventurous Dino (Dominic Cooper), who turned a talent for racing into an empire, Tobey never left his hometown of Mt. Kisco, New York. He runs a garage, Marshall Motors that is, sadly, close to being taken by the bank.

Then, a miracle – Dino hires Tobey and his team to finish the prototype 50th-anniversary Ford Mustang that legendary designer Carroll Shelby was working on at the time of his death in 2012. Less miraculously, Dino’s girlfriend is Anita (Dakota Johnson), the sister of Tobey’s best friend, wannabe racer Little Pete (Harrison Gilbertson). Also along – but not for the ride, is hot blonde, Julia (Imogen Poots). She, it turns out, is as much of a gearhead as Tobey and his crew.

After the Mustang is finished, Dino challenges Tobey to a race with matched Koenigseggs and, when Little Pete wants in, he gets clipped by Dino and dies in a spectacular crash/flip. Dino frames Tobey for Pete’s death and he who does two years before emerging to seek vengeance. The only way he can get it is if he can get into the legendary De Leon race in California, so, enlisting the aid of the Mustang’s owner (who insists Julia accompany him), he sets out in the Mustang. 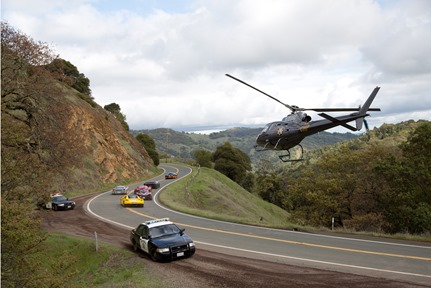 Dino has expected this and placed a bounty on Tobey. Now he has to get from Mt, Kisco to San Francisco in a bit more than a day – while fending off attacks by various nasties seeking Dino’s bounty.

Need For Speed is a better movie than the original The Fast and the Furious – largely because it has a cast of actors and a director, Scott Waugh, who has a background in stuntwork. Because it riffs on a standard revenge plotline and keeps its driving stunts practical, Need For Speed winds up being a solid bit of entertaining.

Waugh exploits action movie tropes in very interesting ways: a running gag in which Benny pops up in a number of different aircraft – one in an apparent to prove to his teammates that he wasn’t making up his tales of expertise; having the hot blonde know cars as well as Tobey’s team, and having the organizer of the De Leon (Michael Keaton) be this totally isolated gearhead who watches events in a roomful of monitors and comments on the action like a Greek chorus.

When the movie is focused on the racing and stuntwork, it zips along like a merrily demented live-action Road Runner/Coyote cartoon. When it pauses, briefly, to dwell on character and plot, it produces some genuine emotion and more than a few good laughs.

In the end, Need For Speed is much better than the average videogame adaptation, though not as pumped up as the last three Fast & Furious flicks. Because its racing sequences are practical, though, and you can tell, it’s much more breathtaking.