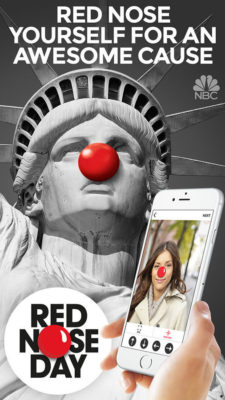 Andrew Lincoln, Norman Reedus and Cast Members of ‘The Walking Dead’ Appear as Viewers Have Never Seen Them Before in Hilarious Comedy Sketch

UNIVERSAL CITY, Calif. — May 24, 2016 — Elton John, Julia Roberts, Will Ferrell, Blake Shelton and Kobe Bryant are among the more than 65 stars who are coming together to have fun, raise money and change lives on “The Red Nose Day Special,” airing on Red Nose Day, Thursday, May 26 (9-11 p.m. ET) on NBC. The star-studded charity event, which helps raise awareness and money for kids in need here at home and around the world, will be hosted by Craig Ferguson and features comedy, music and more.

The special will feature Julia Roberts’ recent trip to Phoenix to visit projects that take care of children who are facing serious health issues without the means to afford basic medical treatment. It will also feature Chris “Ludacris” Bridges making a special visit to an amazing food bank in Atlanta at a school where 50% of the students are living below the poverty line, and where one of the biggest problems is day-to-day hunger. Jack Black, who went to Uganda last year to shed light on the issue of children living in poverty, returns to “The Red Nose Day Special” to give a heartwarming update on Felix, a young boy he met there who had been living on the streets for three years. He will reveal what life is like for Felix today after being helped by a program that aims to change the lives of homeless kids.

Music will also take center stage in “The Red Nose Day Special,” with both Elton John and Blake Shelton performing very special songs. Paul Shaffer will bring his signature brand of great music and high energy as the musical director with the Red Nose Orchestra. Elton’s involvement with Red Nose Day goes back many years in the UK, where he has performed songs as well participated in comedy sketches. In the UK, Elton’s AIDS Foundation has also partnered with Red Nose Day to raise awareness and provide over £5 million to support thousands of children living in extreme poverty in Africa who have lost their parents to AIDS. They have also ensured that more than 200,000 pregnant moms living with HIV get the medicine they need to make sure they have HIV-free babies.

“The Red Nose Day Special” also delivers a great night of comedy, from Tracy Morgan putting his own unique spin on the classic “Snow White and the Seven Dwarfs” while reading to kids, to Paul Rudd committing more money for Red Nose Day than he ever imagined when he promises to donate $5,000 for every three-pointer basketball superstar Blake Griffin makes in three minutes. The fun continues with a comedy sketch featuring “The Walking Dead” cast — Andrew Lincoln, Norman Reedus, Ross Marquand, Josh McDermitt, Steven Yeun, Christian Serratos, Melissa McBride and Sonequa Martin-Green — as viewers have never seen them before.

Red Nose Day has become a cultural phenomenon in the U.K., and raised more than $1 billion globally in the last 25 years. Red Nose Day launched in the U.S. in 2015 as a special day to come together, have fun and make a difference for kids who are most in need. In its inaugural year in America, more than $23 million was raised for the Red Nose Day Fund, with the money now at work in all 50 states across America and 15 countries internationally through programs to keep children and young people safe, healthy and educated.

The money raised by Red Nose Day in 2016 will help support projects in some of the neediest communities in the U.S. and some of the poorest communities in the world. People from all walks of life are encouraged to get involved, have fun and raise money by buying red noses sold exclusively at Walgreens stores nationwide, organizing fundraising events and watching and donating during the television special. Actor and comedian Ravi Patel will also appear in the special. Patel is already a supporter of the cause as he participates in weekly #RedNose challenge videos as part of a Walgreens “50 States, 50 Stories” video series on Walgreens.com/RedNoseDay.

Created by Oscar nominee and Emmy Award-winning writer-director Richard Curtis, (“Love Actually,” “Four Weddings and a Funeral,” “Notting Hill”), the idea of Red Nose Day was built upon the foundation that the power of entertainment and celebrities can help raise money and awareness of poverty to save and change millions of lives.

Richard Curtis is an executive producer for the live NBC telecast (a Universal Television production), along with John Irwin of Irwin Entertainment, and Lily Sobhani.

Red Nose Day (rednoseday.org) is a fundraising campaign run by the non-profit organization Comic Relief Inc. (comicrelief.org), a registered 501(c)(3) public charity. Red Nose Day has raised over $1 billion globally in the last 25 years, and in the U.K. has become a cultural phenomenon where people across the country come together to have fun, raise money and change lives. Red Nose Day launched in the U.S. in 2015, dedicated to raising money to help children who are most in need, both in the U.S. and in some of the poorest communities in the world. Last year it benefited children and young people in all 50 states and in 15 countries internationally.

Red Nose Day returns this year on Thursday May 26, 2016. The day’s events will culminate in a two-hour live primetime TV special (9-11 p.m. ET) on NBC, featuring the biggest stars across comedy, music, TV and film. Funds raised go to the Red Nose Day Fund which distributes the money through programs to keep children and young people safe, healthy and educated. Comic Relief Inc. in the U.S. and Comic Relief U.K. are independent sister organizations that are joined by their shared vision of a just world, free from poverty and the mission to drive positive change through the power of entertainment.