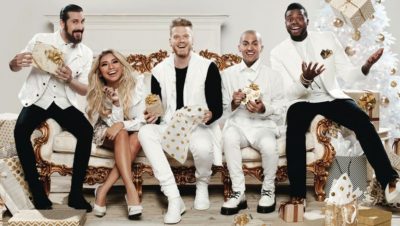 The group will perform a selection of their favorite Christmas songs. They will be joined by Reba McEntire and Kelly Clarkson – with some special surprises yet to be announced.

A Pentatonix Christmas Special will air on Wednesday, December 14th (8/7C). For further details, read on.

‘A PENTATONIX CHRISTMAS SPECIAL’ WILL DELIVER THE HOLIDAY SPIRIT TO NBC ON WEDNESDAY, DEC. 14

The Grammy Award-Winning, Multi-Platinum Selling Vocal Sensations Pentatonix Take the Audience on a Musical Journey through their Holiday Favorites

The one-hour television event will take viewers on a holiday musical journey filled with joy, heart and laughter as the group performs some of their holiday favorites. Joining Pentatonix are one-of-a-kind appearances by superstar Reba McEntire, Grammy Award winner Kelly Clarkson and other surprises to be announced.

“A Pentatonix Christmas Special” is executive produced by Brad Lachman Productions, Inc. in collaboration with RCA Records and Pentatonix.

In just five years, Pentatonix has sold more than 3.5 million albums in the U.S. alone. They have won 2 Grammy Awards and performed for hundreds of thousands of fans at their sold-out shows across the globe. Their YouTube channel boasts more than 11 million subscribers, yielding nearly 2 billion video views, and their 2015 self-titled album has been certified gold after debuting #1 on Billboard’s Top 200. All 7 Pentatonix album releases have debuted in the chart’s Top 10.  In 2015 the group released its first tour documentary — “On My Way Home” — and appeared in the feature film “Pitch Perfect 2.”

“A Pentatonix Christmas” follows 2014’s “That’s Christmas to Me,” which has been certified 2x platinum and includes the quintet’s Grammy Award-winning arrangement for “Dance of the Sugar Plum Fairy.”

Pentatonix is currently on the final leg of their 2016 World Tour.

Brad Lachman has served as executive producer on an unprecedented variety of specials and long-running series for both network and cable broadcasters. His wide range of credits includes major live events, concert performances, reality programs, clip shows and comedy specials.

After creating and producing the groundbreaking and long running hit music series, “Solid Gold,” Lachman was chosen by the Walt Disney Company to serve as executive producer for many of their network specials.

His career highlights include President Bill Clinton’s Inaugural Gala, the Grand Opening of Hong Kong Disneyland, music specials featuring Jennifer Lopez, Harry Connick, Jr., Phil Collins and Michael Bublé as well as Betty White’s 90th Birthday Celebration. In addition, he has executive produced NBC’s Christmas in Rockefeller Center for the past seven years as well as the Macy’s Thanksgiving Day Parade for the past twenty-three years and counting.

Brad Lachman has received seven Emmy’s and resides in Los Angeles with his family.