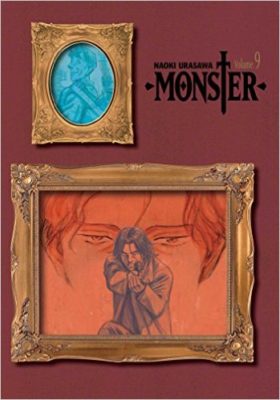 VIZ Media’s Perfect Edition reprints of Naoki Urasawa’s brilliant psychological thriller manga, Monster, has come to the end of its journey with a flurry of final monstrous moments and unexpected moments of heroism.

Monster follows the basic plots of Les Miserables-cum-The Fugitive: Dr. Tenma, a brilliant surgeon, is framed for murder and – as he tries to find the person responsible (a young man known only as Johan) – he is hunted by the dogged and, in his own way brilliant, detective, Inspector Lunge of the BKA in Berlin.

Urusawa’s Monster Perfect Edition Volume 9 brings all three men into close proximity for the first time – though, by this time, Inspector Lunge has seen enough evidence (mostly anecdotal, but overwhelming) to convince him that Dr. Tenma is innocent.

Tenma and Lunge both seek children’s books author Klaus Poppe – revealed to be the real Franz Bonaparte, one of the last remaining figures from the child-raising experiment that resulting in the monstrous Johan.

Characters we’ve come to know and care about – like Nina (Joan’s twin sister), Grimmer (one of the experiment’s failures – and one of the kindest people in the series), the boy, Wim (whose unflagging faith in Tenma may be what finally tips Lunge’s convictions over) and more – return. Though not all survive.

Johan, you see, is planning to commit the perfect suicide – meaning that anyone who has ever been a part of life (even peripherally) must die so that there is no one left to even remember that he existed.

To make that happen, he even sets forces in motion to persuade an entire village to destroy itself!

Volume 9 reveals that Johan is infinitely more of a monster than we could even imagine – and what he’s done prior to the finale has shown him to be incredibly monstrous.

In terms of the technical, Urasawa turns up the pacing in the final stages of his tale – emphasizing pace by mixing panels that look rushed and half-finished with his usual meticulousness. The rushed looking panels emphasize the increased pace – and if you look closely, you can tell there is nothing rushed about them. Every stroke of pen and brush is exactly what’s required to pull the reader quickly through to the story’s conclusion.

While the art dazzles, it wouldn’t mean anything if Urasawa’s writing wasn’t equally brilliant. Monster shows him to have a keen eye for observing the best and worst of humanity and a knack for mystery.

Urasawa has done three manga series that stand against the best works in comics in the world: 20th Century Boys, Pluto x Tezuka (a dramatic re-imagining of Astro Boy) and Monster. Of the three, Monster is his magnum opus. Comics/manga just don’t get any better than this!

Final Grade (for Volume 9 and series): A+