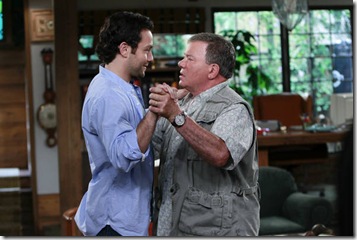 Funny thing… When I received the first look screener of $#*! My Dad Says [CBS, Thursdays, 8:30/7:30C], I laughed. A lot. Then CBS recast the role of Ed Goodson’s [William Shatner] son, Henry, with Jonathan Sadowski. Now? Not so much with the funny. Weird but true.

In the series premiere, Henry visits his father to borrow some money. He’s been laid off from his job at a magazine and burned through his savings and is now broke and homeless. Unfortunately, he can’t just come out and ask for his dad’s help for reasons that are thoroughly shredded in the episode.

Another arc has Ed taking the driver’s test to renew his licence, while a third has his other son, Vince [Will Sasso] and his wife, Bonnie [Nicole Sullivan], ask him to move in with them. The funniest sequence in the ep is one that survives the original pilot intact – Ed taking, and failing, his driver’s test. Other than that, the best gag in the ep is a running gag involving an offscreen raccoon.

Sure, there are good lines here, but Vince and Bonnie weren’t that terrific in the original pilot and their arc hasn’t been changed, so they remain less than humorous. Shatner seizes Ed’s dialogue perhaps a bit too hard, much of the time – but that might just be because of the different actor playing Henry.

Sadowski doesn’t have the same kind of presence as his predecessor as Henry – which means that he gets overwhelmed by Shatner far too easily.

For $#*! to succeed, it needs to have a stronger Henry and better material for Sasso and Sullivan [whom we know can kill with the right material – they did some amazing stuff on SNL]. As things stand, though, $#*! My Dad Says is most definitely not the $#*!.