Sherlock Holmes is one of the most enduring characters in all of fiction. His ability to solve every problem (save for one, according to the Holmes canon) via a combination of knowledge and observation, and the logical extrapolations thereof, plus his acerbic no nonsense attitude make him far more intriguing than most fallible fictional characters and pretty much all other infallible ones.

So it is odd that Mr. Holmes, a film dealing with the character long after he’s retired to his country home and bees, should be so satisfying.

Mr. Holmes opens with Holmes (Ian McKellen), at the age of ninety-three, trying to resolve his last case – a case involving a housewife and the memory of two children lost during pregnancy. As he struggles to recall, the case did not end well and, now, he’s trying to piece it all together and determine why.

The year is 1947 and Holmes is trying everything he can think of to coax his failing memory to put the case together in his mind. At ninety-three, he is failing physically, as well, and has come to rely on his stern housekeeper, Mrs. Munroe (Laura Linney), for help in maintaining his home and making sure he is well.

He also takes a bit of a shine to her inquisitive – and very bright – son, Roger (Milo Parker). Roger takes an interest in Holmes’ bees and takes even more of an interest in learning Holmes’ methods – eagerly solving problems Holmes puts to him as he writes his version of his last case.

As Mr. Holmes progresses, we slip from 1947 to some thirty years earlier and relive the events of that last case. McKellen does a truly brilliant job of showing the still vital sixty-something Holmes in contrast to the feebler version of the film’s present.

We meet Thomas Kelmot (Patrick Kennedy) who, worried about his wife, Ann’s (Hattie Morahan) ‘dangerous melancholy,’ fears she might have been bewitched by a music teacher (Frances de la Tour) who has been teaching her to play the glass harmonica. 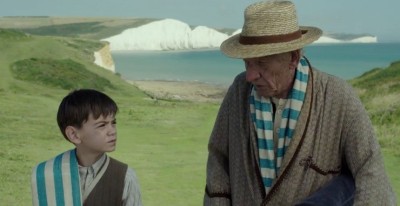 As the older Holmes tries to remember everything exactly, he resorts to a substance called prickly ash – which we see him obtain by visiting a Mr. Umezaki (Hiroyuki Sanada), with whom he has been exchanging letters, in Japan. This side trip also plays into a mystery – one for Umezaki – that revolves around the departure of his father for London some years before the war.

Directed by Bill Condon (with whom McKellen worked on the Oscar®-nominated Gods and Monsters), Mr. Holmes is a deliberately paced series of character studies that connect at odd angles and with differing effects.

Mrs. Munroe could easily have been a stern cipher, but instead, Linney and Condon allow her underlying warmth, concern and anger to flare at precisely the right moments to win her our sympathies. Parker is an unexpected delight as Roger – a boy whose eyes glow with intelligence and behind whose not quite passive facial expressions lurk mischief and an eagerness to learn.

McKellen, of course, gets to play the Great Detective at both the greatest heights and lowest dearth of his powers – making us feel for the older Holmes by contrasting him with his younger self. Something McKellen and Condon understand – that a lot of writers and directors don’t – is that Holmes may have built his life and reputation on facts, logic and objective truth but that doesn’t mean he’s without a sense of humor – or above a bit of mischief.

Mr. Holmes was adapted by Jeffrey Hatcher from a novel, A Slight Trick of the Mind by Mitch Cullin – which, given the quality of the movie, I must assume is extremely good.

The cinematography, by Tobias A. Schliessler (The Rundown, Friday Night Lights), is almost lyrical – especially in sequences in and around Holmes’ country home (which is curiously close to the white cliffs of Dover), but also in the way he manages to capture both the elegance and danger of London and the melancholy of post-WWII Japan.

No true Holmes fan should miss Mr. Holmes – and anyone who has seen any of the many TV and movie versions should find the film, as Holmes might say, most instructive. Even at the age of ninety-three, Holmes is not only capable of learning but willing to do so.