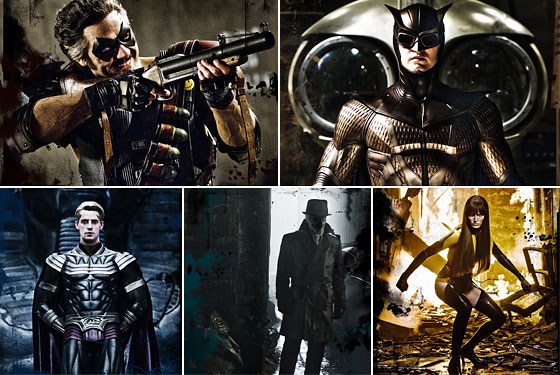 The movie made me feel the same way. Like, I can recognize the brilliance of it, or actually brilliance is a really strong hyperbole, 300 Director Zack Snyder movie isn’t brilliant, it’s just really good, he nailed it. The problem is, it’s almost a word for word, shot for shot translation of the book, or a Cliff’s note version.  He got rid of a lot of the book’s tangents like Hollis’ Behind the Mask book excerpts and the newsstand guy and the kid reading the story about the pirate (which I’ve never understood the point of). Unfortunately, he spends too much time on showing us Nixon giving speeches and preparing for war, I understand that those scenes added context to the global threat but it just felt a bit forced.

Snyder’s casting was perfect, Jackie Earle Haley as the no compromise, Walter Kovacs / Rorschach is a fabulous performance. Can I be the first one to say this performance should be looked at for Academy consideration next year, it’s that good. It’s not that he’s a real nuanced character. Rorschach is relentless in his pursuit of evil. He’s not out to arrest bad guys or try to understand what makes them tick. Haley is exactly how I always envisioned Rorschach, his movements, his speech everything is spot on.  The same is also true for Jeffrey Dean Morgan as Edward Blake / The Comedian a hero who eventually became a government spook and just as bad as those he hunts.  Rorschach sums up the movie’s theme when he asks “Why are there so many heroes who never live past 35, sane and intact.” He then goes rattles off a long list of “masks” who had tragic ends or went insane.

The movie falls apart a bit for me when it focuses on the world’s only superhuman Billy Crudup’s Dr. Manhattan / Jon Osterman is perfectly cast and realized. The problem is the character itself is detached from the world around him and the film shows this detachment in excruciating detail. As I have stated in numerous other reviews I’m not a fan of watching films when one of the main characters is completely detached from the proceedings. I understand that’s the point and we’re supposed to sympathize with these people, but how can I if they don’t care themselves? Maybe it’s because I’ve been watching those horrible Motion Comics for the last two weeks, but watching the film I felt like I was literally watching the individual issues come to life so the movie has a weird multi-chapter flow to it. It doesn’t feel like a typical three act film it feels like a 6 part comic series. Scenes end with quotes and the film seems to flow into another section. For instance there’s a moment when after the police captures Rorschach it fades and then goes to Sally Jupiter / Silk Spectre (Carla Gugino) and Dan Dreiberg / Nite Owl II (Patrick Wilson) the break is directly from the comic. It’s not jarring and is a smooth segue but it just felt a bit odd, like the movie just kept stopping and re-starting.

It’s at this point I should talk about Matthew Goode as Adrian Veidt / Ozymandias – the World’s Smartest Man, unfortunately I can’t because the movie gave such short shrift to him. He was only on screen for about 10 minutes. Which makes the big reveal at the end feel a bit disconnected. The same is true in the book. In talking about the ending Snyder completely changed it, but managed to keep the essence and meaning of it. I don’t want to spoil it and say much more than that.  I will say Goode is horribly miscast he just sort of blends into the background and like Manhatten doesn’t seem connected to those around him.

Watchmen doesn’t contain a musical score which was strange at first, but it eventually added to its dark tone. What it lacked in score it made up for with songs that seemed strangely out of place like playing Nina’s 99 Luftballoons when Spectre and Dreiberg are out on a date.  This could be because I’ve never heard a lot of these songs in other films before. I mean they must have spent a fortune to get the Dylan Songs alone. But playing the Times are Changing during a funeral? Didn’t work, that song would have been better in the opening montage. Most of the songs used are based on lyrics that Moore included in the comic books. But I’m assuming Moore used these songs for their lyrical power not because he thought they’d be appropriate to play over some key scenes in the film.

I said in the beginning, I get why Watchmen is a brilliant, ground breaking Graphic Novel that everyone should read multiple times, but it leaves me a little cold.  This movie is the same way, it’s a really strong piece of work that everyone should see at least once, I’m not sure if it’s a movie I’d want to see 3 or 4 more times. I’ll definitely watch it at least once more when it comes out on Blu-ray or maybe even see it in the theater, if for no other reason than to see Rorschach again.  I did see this on Digital Imax – my first Imax (non Museum) movie experience and I don’t think it added anything that made the hour drive worthwhile.