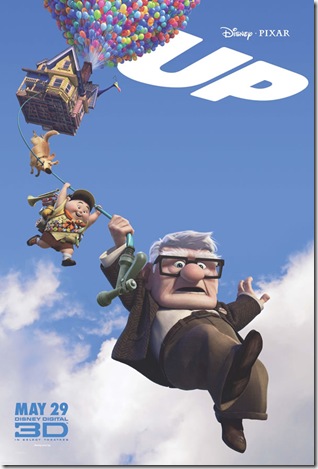 When the Disney rep asked me what I thought of UP at the conclusion of the screening, my immediate response was, “Several million points out of ten!” Yeah, I know. Douglas Adams. Zaphod Beeblebrox. What can I say – I only steal from the best. The thing is, UP is going to make more top ten, top five and top three lists than almost any other film to be released this year. Why? Because it is Pixar’s biggest risk and most fully realized motion picture.

If you’ve seen the TV spots and the coming soon trailers, you might well be expecting a comic romp – and you’d be right to some extent – and it would have been the usual excellent Pixar release had that been the case. Instead, UP is a smart, beautiful, funny and frequently touching story that involves a number of fully developed characters in situations ranging from the mundane to the extraordinary.

All you learn from the trailers is that Carl Fredricksen [voiced by Ed Asner], a curmudgeonly old man, launches his home into the air through some imaginative thinking involving helium balloons – and has taken on a stowaway in the form of a Wilderness Scout named Russell [Jordan Nagai].

What the trailers don’t [and can’t] tell you, is that young Carl dreamed of adventure – and met an adventurous girl named Ellie [Elie Docter]. Somehow, they had a wonderful life together even though they never went on their one big adventure – to find their hero, an explorer named Charles Muntz [Christopher Plummer], who went to South America in search of a unique kind of bird. While the film tells their story – in an almost silent, eight-minute montage – you can almost hear a pin drop. And when it comes to its inevitable end, we understand why Carl has taken his house into the sky. And we feel the full impact of the revelation that Carl receives near the film’s conclusion. 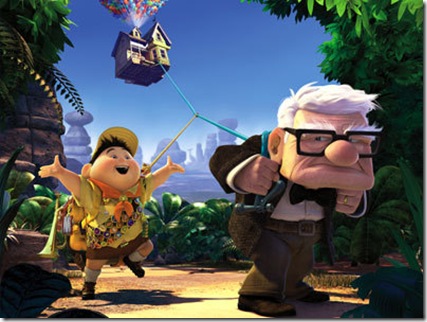 On the other hand, young Russell’s story unfolds over the course of the movie – though it begins with his determination to get the one badge he needs to take him to the next Wilderness Scout level. Although there are a number of poignant moments for Russell, they are blended into the grand adventure of travelling to Paradise Falls, the area in which Carl expects to find Muntz.

UP is well-written, beautifully animated and the grandeur of its adventure is matched by the depths of its heart. Carl and Russell are two of the best characters that Pixar has ever created. That the film doesn’t shy away from either life or death – and makes it understandable to all but the youngest of children [who will be won back by Dug – voiced by Bob Peterson – the cheerfully goofy dog in the trailers]. That, in itself, is an achievement.

Now, take the quality of the film and add 3D to it – without doing anything to expressly call attention to it – and the extra depth of the 3D adds to the impact of the depth of the story and its characters. UP is Pixar taken to the next level in every dimension. I’m sure there will be one or two out-of-season Scrooges or Grinches who will attempt to humbug you out of seeing UP. Do not listen to them. Their senses of wonder have long since atrophied. UP is what movies – 2D, 3D, animated, live action – are meant to be. Uplifting.

2 thoughts on “MOVIE REVIEW: UP – Reserve a Spot on Your Top Five List for Pixar’s 10th Wonderful Movie in a Row!”