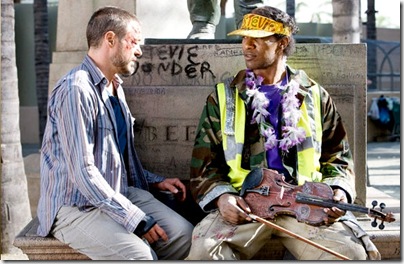 In the film, Mr. Lopez is a decade younger and divorced, with his ex-wife [Catherine Keener] as his editor at the Times. In real life, Mr. Lopez is in his early fifties and happily married to a woman who is not his boss, at least professionally. What matters more than that, is the story of the odd friendship that develops between the columnist and the musician. The Soloist, in its heart, remains true to that story.

Director Joe Wright has constructed a film that moves in the same manner as its characters. At first, it seems a bit choppy – not quite disorientated – as we meet Mr. Lopez and Mr. Ayers. As the film progresses, the pacing and editing smooth out, becoming oddly graceful as the friendship between the two grows. And then, instead of manufacturing some kind of false conclusion, it reaches the present [well, the present at the time the film began shooting] and stops. Mr. Ayers isn’t saved by Mr. Lopez in terms of maybe acquiescing to requests for him to take medications that could help him.

Mr. Ayers may be able to find truth, beauty and reality when he plays, but when he doesn’t it is still a fight for him to figure out what is real and what is not – a condition he has been dealing with since the end of his second year at Julliard. Foxx does a brilliant job of portraying that descent in a unique hell – and the film lets us hear the voices that plague him.

Downey plays Lopez with a restraint that makes him believable in a way that recalls James Mason, the master of the minimum required motion. Like Mason at his best, Downey communicates more with less than at any other time in his career. His performance allows Foxx to replicate the stream of consciousness of Mr. Ayers’ speech patterns without veering off into parody. The two balance each other in a way that is definitely consciousness raising.

Add to all of the above the music of Beethoven and some oddly appropriate songs [like the Neil Diamond version of Jerry Jeff Walker’s Mr. Bojangles] and a score that supports the film rather than calling attention to itself, and the result is the best of the year, so far. What a shame that it wasn’t released on its original date. It might well have won an Oscar® or three. What a shame that it will most likely be forgotten when it comes time to nominate for the 2010 Academy Awards.

One thought on “MOVIE REVIEW: The Soloist Plays Brilliantly!”