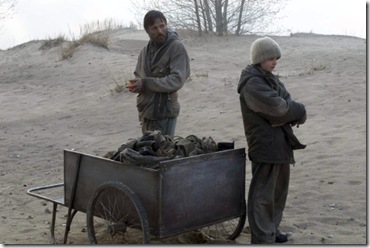 In their struggle to survive, the pair has to deal with the possibility of falling pretty to cannibals or plain old thieves and killers. All plant and animal life is gone – and the trees of barren forests are literally falling over. Shoes are worth killing for; food is beyond value. The Man [Viggo Mortensen] has a cough that bodes ill; The Boy [Kodi Smit-McPhee] takes him at his word that everything will be fine. The Man’s eyes clearly show he has no hope and yet, he struggles desperately to give some to his son. Even so, he has a pistol with two bullets – one for each of them – just in case…

In his determination to keep his son alive, he is as relentless as whatever turned the planet into a near-lifeless grey orb. It is The Boy who keeps him human by insisting he help an Old Man [Robert Duvall] and forgive The Thief [Michael Kenneth Williams] who took their stuff but let The Boy unharmed. There is an interlude of joy when the two find a well-stocked fallout shelter, but what The Man perceives as prowlers scare them away after a brief stay.

Joe Penhall’s dialogue is shaved to the least amount required to make its point – even in the flashbacks that serve as The Man’s memories of before they went on the road. Charlize Theron is heartbreaking as his wife – Woman – who goes off to die and leaves the two bereft [though The Boy barely remembers her, now].

John Hillcoat’s direction would seem almost leisurely if the film wasn’t shot in greys. Instead it seems like the lethargy of a man who knows he’s dying and has given up the fight. Thus, by the final moments – when hope again raises its faintly flickering head – we have no reason to expect that, after the lights come up, much good will come of it. If it weren’t for outstanding performance by Mortensen and Smit-McPhee, there would be little to recommend the film.

The Road could be a story about the indomitable spirit of Humanity; the need for Family, or any number of other ideas. In the end, though, it’s a slice of post-apocalyptic life that seems not to be about anything in particular. Just what we need for Christmas…