In 1957, a group of under-sized neophyte baseball players from Monterrey, Mexico became the first non-American team to win the Little League World Series. The Perfect Game is sorta, kinda their story. 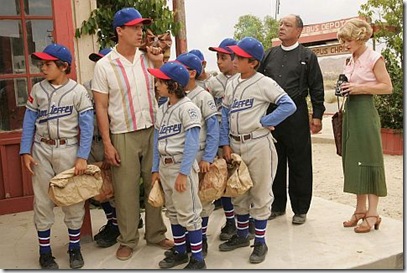 The movie, adapted for the big screen by the author of the book of the same name, W. William Winkour, plays fast and loose with history in an attempt to make the movie more memorable when the story itself really doesn’t need any such flourishes. Sandy Koufax wasn’t a star in 1957, and it’s extremely unlikely that a team from Kentucky would be integrated – to mention just a couple of unnecessary tweaks. Those and other such additions for the sake of drama might best have been excised. Certainly, those cuts would have made The Perfect Game not only better, but a good deal shorter. At a hair under two hours, it does lag at times.

But what matters is the story of the boys who made history – and you know from the title of the film how they did it – if you call a movie The Perfect Game, well, then you’d best be sure it has one. The interesting part is how these unlikely [there’s that word again] kids put their faith in God and a former St. Louis Cardinals towel boy and set the baseball world on its heels.

Using a rotation of two pitchers – Angel [Jake T. Austin] and Enrique [Jansen Panetierre], and the discipline instilled in them by Cesar [Clifton Collins Jr. – mostly recently seen in The Boondock Saints II], the spunky team from Monterrey cut a swath through a number of teams, going undefeated in their visit to America.

While the young cast – including kids like Austin [Wizards of Waverly Place], Panetierre [The Last Day of Summer] and Moises Arias [Hannah Montana] who have become tween idols since the film was made – is uneven [lots of mugging going on], the film is grounded by Collins and a number of quality character actors. Cheech Marin, for instance, plays Padre Estaban, the priest who helps the team get together – and Cesar to become their coach.

Key support also comes from Carlos Gomez [Angel’s unimpressed father], Frances Fisher [a waitress in a diner where the team stops for lunch], Louis Gossett Jr. [a groundskeeper whose assistance is accepted by the Monterrey team after their opponents fail to heed his advice], William May [Clarence, a minister who lends a hand] and Bruce McGill [the Cardinals’ boss] – to name a few.

Emilie de Ravin [Lost, Roswell] is fine as Frankie, the reporter assigned to cover the Monterrey team until they lose – even though she hates baseball [quite possibly because her father named her after a baseball player]. It’s her conversion from resisting the assignment to becoming caught up in it that gives the audience a voice.

Sure there’s a clip of a baseball soaring into the sun that’s used way too often, and the power of baseball seems to cure drunkenness, create romance and initiate intervention from the U.S. Attorney-General when a three-day visa needs to become an indefinite stay [and I don’t even want to remember how many times the phrase David and Goliath was used]. Somehow, though, in spite of being too long and tweaking history too much, the simplicity at the heart of the story is winning enough that scenes that we know are coming still have emotional power – and there more than enough of those scenes to carry the film.

Director William Dear [probably best known for Harry and the Hendersons] may be far too lenient in the cutting room, but he does bring warmth and freshness to scenes that should be clichés. The Perfect Game isn’t The Natural – or even Bull Durham – but it is warm-hearted and infectious and there are performances that salvage even the historical inaccuracies [thank you, Frances Fisher, Louis Gossett Jr., et al].