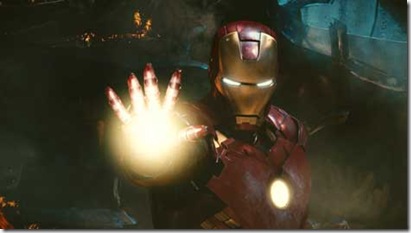 The good news is that some parts of this shopping list are checked off with style and grace: Tony and Pepper are still, at heart, the leads in a screwball comedy – and Downey and Paltrow are top form here; the new villain has the comics’ Crimson Dynamo’s name – Ivan Vanko [Mickey Rourke] – but instead of wearing the hopelessly out of date crimson armor, wields a pair of plasma whips that can slice and dice even Stark’s fancy suit; and finally, there’s Justin Hammer [Sam Rockwell – who was a finalist in casting Stark], a hi-tech weapons manufacturer who got Stark’s old Department of Defence contracts even though he’s not nearly as talented.

Then there’s the S.H.I.E.L.D. stuff. Nick Fury’s [Samuel L. Jackson] appearance comes after Stark has been profiled by top agent Natalie Rushmore/Natasha Romanov [Scarlet Johansson]. It’s pure exposition that only works in tandem with Rushmore/Romanov’s undercover work as his new assistant [hired when Stark appoints Pepper C.E.O. of Stark Industries]. Johansson is more than serviceable as the deadly Romanov in her guise as Rushmore, but really kicks it when in costume, breaking into Hammer’s HQ. Jackson makes his role as IM2’s version of Basil Exposition tolerable, but the whole S.H.I.E.L.D. arc seems shoehorned into the movie. Clark Gregg has a few good moments as Agent Coulson, but he doesn’t feel at all necessary, until the Easter egg that follows the closing credits.

The means of getting Rhodey into an Iron Man suit almost works, though it’s hard to believe that a totally drunk Stark could give him much of a fight. The part that works is the part where we learn that the device powering Stark’s heart – and the suit – is killing him. Even though he’s dying, Stark continues to work the suit – he’s addicted to something almost as powerful as alcohol: fame. We see neon signs of that during Stark’s appearance before the Senate, where he faces down an obnoxious senator [Gary Shandling] who wants him to give the IM suit to the government – and when he makes his over the top entrance onto the stage of the Stark Expo [a World’s Fair put on by Stark… no, no ego at all…]. 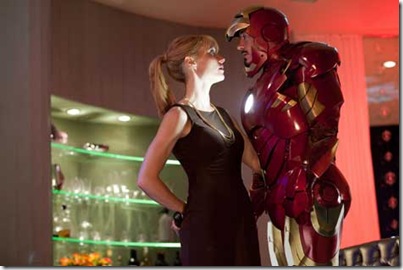 This is also where Stark’s daddy issues come into play. He’s always felt that he was his father’s biggest disappointment. Though we only see Howard Stark [Mad Men’s John Slattery] on film, we do get a sense of his commitment to a better future through technology. This is also where Vanko’s hatred of Stark comes from – their fathers had been a team following the senior Vanko’s defection from Russia.

Everything, of course, leads to a big blowout battle, and here’s where everything falls apart. Vanko, who has been funded by Hammer, betrays him and uses his improved versions of Hammer’s tech to gain his revenge on Stark. Where there was a real, personal feel to Iron Man’s battle with Obadiah Stane’s Iron Monger in the first film, the battle royale here is simply not as emotionally involving – even when Vanko steps in, it doesn’t really work. Rourke fills Vanko with a mix of sorrow and anger, but when he finally appears at the height of the fracas, he feels emotionally lost in the souped up suit he’s created [using ideas provided by Stark, earlier].

Technically, IM2 looks good. The action scenes move well – though they seem less emotionally charged; individually, the cast shines – though there are entire arcs that could have been cut without hurting the film; the effects range from so-so [Vanko’s first take on the plasma whips] to exceptional [the fight between Rhodey and Stark is killer, even if the reason for it is shaky]. The big blowout at the end looks great – though it lacks heart.

Justin Theroux [Tropic Thunder] was brought in to write a witty, emotionally charged film and then given too much stuff to cram into it. The first film worked precisely because the general public loved the characters. Here, as good as the character stuff is, it takes a back seat to the action – instead of being the basis for it.

Don’t get me wrong. Iron Man 2 is entertaining. It’s just not as consistently smart, or emotionally satisfying, as the first one. It’ll likely make a gazillion dollars – and it’ll earn them – but when you rewatch the first one, think of how much better this one could have been.