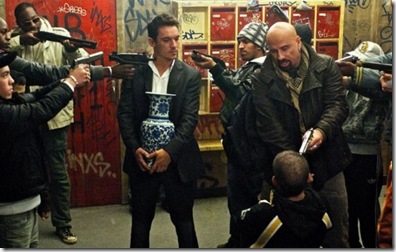 James Reece [Jonathan Rhys Meter – The Tudors, Gormenghast] is a low-level intelligence operative who is acting as the American ambassador’s aide and whose girlfriend, Caroline [Kasia Smutniak] has just asked him to marry her. Although he hasn’t had any specialized training, he longs to go into the field – and gets his chance when he’s assigned to drive top agent Charlie Wax [John Travolta] around the city. And then the fun begins…

The rest of the film uses two vague plot arcs – one centered on drugs; one centered on an international political convention – to plunge Reece so far out of his depth that, by the third act, he’s a shell-shocked bundle of nerves. People die in all sorts of amusing ways – thrown from a tenth floor stairwell; shot by various guns; knifed; bazooka’d [if that isn’t a word, it should be], and bombed.

The madness and mayhem are of a sort that is so purely designed as to almost achieve a kind of detached wit – but not quite. What keeps that distancing from happening is Travolta’s glee at portraying a good guy who is not really good [except in the sense of being good at his job] and not at all nice – though he does appreciate a cup of fine homegrown mint tea. Reece is almost too much of a cipher to matter except a plot device, but Rhys Meyer does get a few good moments and, being the actor he is, he seizes them.

The plot twists are almost irrelevant [mostly because it’s only almost a plot]. What matters is the ride, and it is fun – but only if you’re in the mood for frantic pacing and a high level of mayhem. In other words, it’s a movie that fans of the aforementioned Joe Bob Briggs would appreciate as much as he would. If that’s not you, then stay away.

One thought on “MOVIE REVIEW: From Paris With Love – Pierre Morel Zips Another One Past Us!”