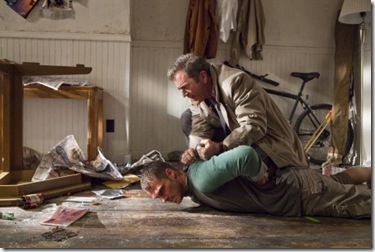 First, although she’s only in the movie for a comparatively short time, Novakovic has great chemistry with Gibson, which makes their relationship feel real and his ensuing rage natural. Second, Ray Winstone is superb as Jedburgh, an Englishman with a Massachusetts driver’s licence – and a fixer for hire – he makes problems go away by drawing attention away from and/or other means… Third, Director Martin Campbell [The Mask of Zorro, Casino Royale] directed the mini-series and has a way of persuading his audience that whatever’s going on, no matter how odd, is really happening.

The film’s political and corporate aspects are, essentially, a McGuffin – the plot point that allows all the other action to take place. In and of itself, it doesn’t really matter. What matters is whether you buy the characters and the journey they take as a result of the established McGuffin. In edge of Darkness, you can do that.

Which brings me to the final reason that the movie works: Gibson. Sure, we’ve seen him do the revenge thing – that was what Mad Max was about and Payback is pretty much summed up by its title – but this Gibson, in his mid-fifties, brings a restraint to his role that you won’t find in those movies. Craven isn’t an over-the-top berserker – he’s on the verge of going there, but you get the feeling that he’s keeping himself from blowing up until he has a definite target and proof. Look in his eyes – you can see tears well up in them, from time to time – but he sheds none of them.

If there’s anything that might make us think that his grief has made him crazy, it might be that he continues to converse with his daughter – but that could just be a combination of memories and conjecture as to how she’d respond if she was still with him.

That Gibson is able to provide such shadings is no surprise. He’s been doing that over the entire course of his career. It is between those shadings, and his encounters with Jedburgh, that make his bursts of violence not only inevitable, but strangely appropriate.

Sure Edge of Darkness has its flaws. Casting Danny Huston as the bad guy, for example, is painting a target on the character. Then there’s the final scene, which I don’t remember from the mini-series [it’s been a couple of decades-plus, than you very much], but feels tacked on – like a Hollywood ending to end things on a forced upbeat. In between Huston’s first scene and that final scene, there are moments where the pacing feels a bit forced, or unnaturally deliberate, too. But these are not game breakers.

Edge of Darkness is a gritty, frequently nasty revenge flick that works more than well enough to be worth seeing.