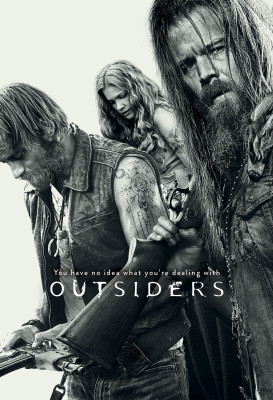 A new teaser has been released built around the clan’s rallying cry, ‘Ged-Gedyah,’ which loosely translates to ‘Hell Yeah!’ Outsiders premiere on WGN America on Tuesday, January 26, 2016 (9/8C). Check out the new teaser after the break.

The ensemble cast for “Outsiders” includes: David Morse (“Treme,” “Hurt Locker”) as Big Foster, the gruff and powerful heir to tribe leadership; Thomas M. Wright (“The Bridge,” “Top of the Lake”) as Sheriff Wade Houghton, a cop who has a rough and mysterious history with the Farrells, and grapples with several personal troubles of his own; Ryan Hurst (“Sons of Anarchy,” “Bates Motel”), as Lil Foster, a massive mountain man and son of Big Foster; Joe Anderson (“The Divide,” “Across the Universe”) as Asa, a former member of the Farrell clan looking to rejoin the family after a 10-year stint with the outside world; Gillian Alexy (“The Americans,” “Damages”) as G’Winveer, a healer and a survivor, and Asa’s trusted confidante; Kyle Gallner (“American Sniper,” “Veronica Mars”) as Hasil, a young, intuitive soul who feels rejected by the group; Christina Jackson (“Boardwalk Empire,” “Deception”) as Sally-Ann, a beautiful girl from a mining town who is fascinated by the Farrells, and Hasil, in particular; Francie Swift (“Hostages,” “House of Cards”) as Haylie, a clever and cunning all-American community relations manager representing the encroaching coal company; and Phyllis Somerville (“The Curious Case of Benjamin Button,” “The Big C”) as Lady Ray, the regal yet tough leader of the Farrell clan.