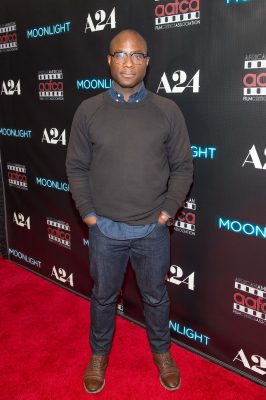 Moonlight — based on the play In Moonlight Black Boys Look Blue by MacArthur Genius Grant winning playwright Tarell Alvin McCraney — has swept the Indie Spirit Awards, clearing a path for possible Oscar® wins at the 89th Academy Awards®, here’s a look back to a recently held event with Barry Jenkins, the film’s director.

At the Film Society of Lincoln Center, Jenkins curated “Illuminating Moonlight,” at which  the director screened six features and two shorts; in turn, he explained why he handpicked them and how they influenced his work.

Despite all of the accolades bestowed on A24’s indie film, getting these Best Director wins for Jenkins hasn’t been easy. In fact, there’s only been three B lack film directors to have earned a nomination: John Singleton (“Boyz n the Hood,” 1991), Lee Daniels (“Precious,” 2009) and Steve McQueen (“12 Years a Slave,” 2013). None of those directors won — though McQueen did claim Best Picture for “12 Years” as a producer of the film.

Af first glance, “Moonlight” is a simple film but under the surface it’s much more. Under Jenkins’ direction we feel deeply for the The main character Chiron and the stoic, silent ebony hued gay man he grows up to be; his life, growing up in the drug fueled Miami housing projects, is eerily familiar to many in the African-American community.

Shot with a documentary-style realism, Jenkins neither evades the stark images of poor black communities or glosses them over. He presents his view with honesty and the film reminds us that, as people of color, we so rarely get to have these stories told. It’s an epic, filled with the prickly turns of navigating romance and trying to survive in a world that hates us.

When I first read Tarell McCraney’s play In Moonlight Black Boys Look Blue, I wasn’t sure what to make of it. It was radical in form and dense in meaning, and the film version of what I’ve always described as something “halfway between the stage and the screen” didn’t readily present itself.

And then I remembered the film Three Times — Taiwanese director Hou Hsiao-hsien’s triptych about three young couples, portrayed by the same pair of actors (Qi Shu and Chen Chang), navigating the intricacies of courtship and companionship. The conceit of Hou’s wonderful, breathtaking film was the contextualization of similar relationships against three different time periods: 1966, 1911, and 2005.

Watching it at the Telluride Film Festival, I was struck by how freeing the structure was for the viewer. Rather than straining to follow continuity across the three stories, I found myself drifting into a deeper understanding of the film’s central relationship, with a clearer understanding of how societal norms play a large role in the performance and presentation of love.

In the case of Moonlight, the influences are wide-ranging, from Claire Denis’s  Beau Travail to Kahlil Joseph’s  Until the Quiet Comes. In curating this lineup of cinema inspirations for the Film Society of Lincoln Center, I sought to draw from films that could be more felt in the workings of Moonlight rather than seen.

In the works of Hou, Wong, and Nagisa Oshima — from a world away, the globe’s most populous continent — that’s the place I first found myself enamored with cinema. On to France (by way of the French Foreign Legion’s presence in Djibouti) for Beau Travail, my favorite film by my favorite filmmaker.

In Charles Burnett’s wondrous Watts-set masterpiece Killer of Sheep, a film I saw for the first time while an adult . . . yet which I very much wish I had seen as a child. And Carlos Reygadas’s Silent Light —his treatment of sun-blazed faces and wide-open spaces; pulchritude, corporeality, serenity.