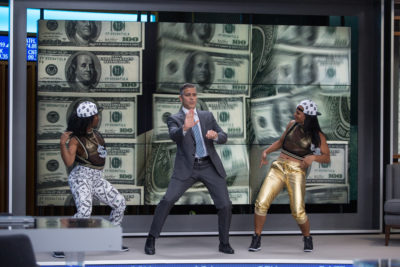 Money Monster is a timely hostage thriller that capitalizes on people’s distrust of Wall Street.

Lee Gates (George Clooney) is the host of Lee Gates’ Money Monster (think CNN’s Jim Cramer with even more adrenaline and funnier schtick). He’s just begun his show – after a bit of business showing how poorly he treats his producer/director, Patty Fenn (Julia Roberts) – when a delivery guy (Jack O’Connell, ’71, Unbroken) shuffles onto the set with a couple of boxes, whips out a gun and persuades everyone he’s not a prank by firing off a round.

At gunpoint he forces Lee to open a box and put on a suicide bomber-type vest.

Then in front of America – first, but soon the rest of the world – he takes Lee to task for some bad advice about Ibis. He wants someone to explain to him how a computer glitch could disappear $800 million – and he wants that answer right, bloody NOW! 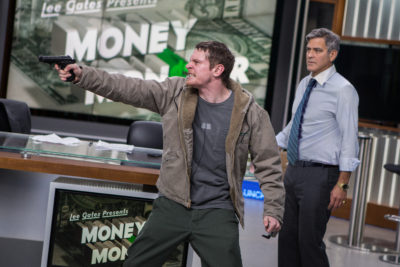 The mechanics of the story are familiar – high-profile hostage taken; police negotiator brought in to stall while the police find a way to shoot the bad guy – but what’s interesting here is that Kyle, our delivery guy, piques Lee’s curiosity almost as much as he terrifies him and Lee offers to help him find that answer (which is as much of a shock to Kyle as it is to Lee).

There’s an arc with Ibis’ PR head, Diane Lester (Catriona Balfe, Outlander), that begins with her basically reciting company talking points but goes elsewhere later. Balfe, with her Scots accent held back just a touch, gives Diane an intrigue – we want to know more about her and won’t be surprised to discover that she’s nobody’s fool.

There’s an arc for Lenny (Lenny Venito, The Neighbors), Money Monster’s lead camera operator, who gets to do his job through a very peculiar set of circumstances.

Finally, there are key appearances by Dennis Boutsikaris (Better Call Saul), as Avery Goodloe, Ibis’ Chief Financial Officer, and Dominic West (The Affair), as Ibis’ mysteriously absent (until late in the film) CEO.

The script – by Jamie Linden (We Are Marshall), Alan DiFiore (The Bridge, Grimm) and Jim Kouf (National Treasure, Grimm) – is pretty sleek, if not quite adhering to the film’s real-time scenarios (though they kind of hang a lantern on that through the character of Ron Sprecher (Christopher Denham, Manhattan) and the crazy things Patty has him doing. 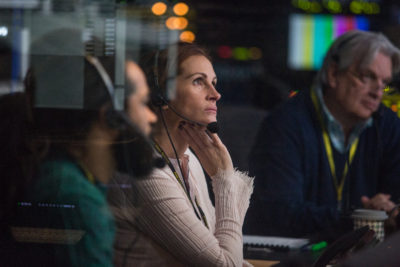 Jodie Foster, though, steers her cast through this peculiar situation with style and efficiency (Money Monster comes in at 98 minutes). She keeps the film lean and mean – and creates tension by having Kyle fire his in the few minutes he’s on screen, thus making us aware that he’s not kidding. We don’t know if he’ll do it again, or explode the bomb vest. One thing we do know is that things look bad with possibilities for a positive outcome getting bleaker as we go.

Foster does a nice job of interjecting bits of humor – ranging from overt physical stuff (Lee likes to dance to hip-hop with a couple of black backup dancers), to the gallows humor of bringing in Kyle’s girlfriend, and Lee’s efforts to save his life by getting the public to buy Ibis stock.

Overall, I really enjoyed Money Monster. It was a taut, thoughtful thriller that used a timely situation as its base.

O’Connell is terrific as Kyle – he brings something primal to the character’s anguish and desperation; Clooney takes a character who’s become something of a mercenary and an ass and makes him sympathetic, and Roberts gives Patty the kind of iron will you need to produce a live show with any degree of success – and uses that will to get through this situation.

In Money Monster, Foster has given us a really good thriller that will also make us think a bit.