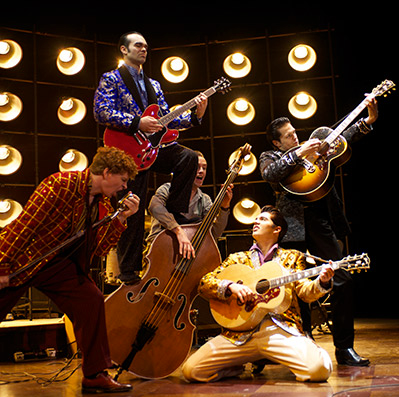 Ok, I’m going to butcher a metaphor here, but work with me. Like a fine wine, The Million Dollar Quartet gets better every time I see it. MDQ is a rousing retailing of a slice of musical history. Johnny Cash (Scott Moreau), Elvis Presley (Tyler Hunter), Carl Perkins (James Barry) and Jerry Lee Lewis (John Countryman) all met December 4th, 1956 at Sam Phillips’ Sun Records.

Each person was at a different point in their careers and all had issues that needed to be resolved. As much as MDQ retails the story of this fabled night, it is also the story of legendary Record Producer Sam Phillips (Vince Nappo).

This being my 4th experience with this show, I was initially put off by look of the cast. In previous productions they seemed to find actors who actually resembled the folks they played. This time out the cast seemed a lot older than I was used to. But once the music started it became easier to just roll with it.

As they say in the beginning “there’s no faking it here folks.”

While the cast may not have looked the parts they still channeled the essence of who these people were and rocked it out for 90 minutes. It was impossible not to get swept up in the pure joy these guys show on stage as they go through pivotal hits including Blue Suede Shoes, Great Balls of Fire, Hound Dog, That’s All Right, Sixteen Tons and more. They even managed to work in a little sexy female vibe with Fever and I Hear You Knocking courtesy of Elvis’ sexy girlfriend Dyanne (Katie Barton.)

In previous reviews of this I always mention how Jerry Lee Lewis steals the show. It is hard not to like the brash, young Lewis; this time out I was really impressed with Vince Nappo’s Sam Phillips. You get so caught up in the music that sometimes you forget that this really about Sam Phillips as much as it is, as he calls them, “his boys”.

Book authors Colin Escott & Floyd Mutrux do a brilliant job of staging and setting the tone of their story. It could easily just be a 90-minute jam session with great Impersonators, but the tale is richly layered in it’s cliff notes style simplicity. Perkins narrates the entire evening and tells funny, witty stories about how he discovered each of them and shaped them to be who they eventually became. This is such a rich story that I’m surprised Hollywood has never made a film about Sam Phillips’ life nor this legendary evening.

He is defensive when it comes to his business decisions. At one point he laments about how people joke about him making the worst business decision in history – selling Elvis’ contract to RCA for $40,000. “I was up to my teeth in debt and Sun Records wouldn’t have survived another year if I didn’t make that deal. I invested in a little hotel outfit down the street called Holiday Inn. If that’s considered a bad deal, I’d take it every day.”

The tension builds as we see Perkins being upset that Elvis stole Blue-Suede shoes and now everyone thinks Perkins is covering Elvis. Phillips wants to re-sign Cash, even though Cash has already signed with Columbia. Elvis is feeling lost and homesick and is in the background pulling strings to get RCA to buy out Sun records. Adding fuel to this volatile mix is brash Jerry Lee.

I’ve always liked the set design for MDQ. I took my father to see this for the first time and according to him this was a really accurate reproduction of the real Sun Records. As Sam Phillips says in the show “I bet you are surprised that it looks like an old garage. That’s because it is.”

I love how this show ends with a simple recreation of the famous shot of the four of them at the Piano. As the imaginary flashbulbs go off, we see the photo of the real guys. The show closes on a melancholy, bittersweet note about everyone finding great success in their career, but maybe not their personal lives.

The show could easily leave us on this depressing note, but the Encore turns into a mini concert as the lights come back on and the sequin jackets literally drop from the sky. Each artist gets to perform one signature number and the audience ate it up. Everyone jumped on their feet and it was like being transported back into the past.

There is an incredible Kodak moment where everyone Stands on a large upright bass with Elvis on his knees playing his guitar while confetti rains from the ceiling. Man I kept wishing I was able to take a photo. The lighting design, costumes, everything was stunningly beautiful at that moment.

Million Dollar Quartet runs in the John F. Kennedy Center – Eisenhower Theater evenings at 7:30 pm. Tuesday through Sunday from September 24 to October 6, 2013 with matinee performances on Saturday and Sunday.  Upcoming tour stops include Boston, Ma, Akron, Oh, Prior Lake, MN and others.

This article was originally published at Blogcritics.com