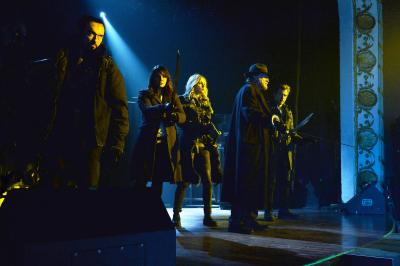 Award-Winning Thriller From Guillermo del Toro and Carlton Cuse, Based Off The Best-Selling The Strain Trilogy from del Toro and Chuck Hogan, Returns to FX on Sundays at 10 PM e/p, Beginning July 12th

LOS ANGELES, May 19, 2015 – The Strain returns to FX this summer for its highly-anticipated second season on Sundays at 10 PM e/p, beginning July 12th. The award-winning thriller from Guillermo del Toro and Carlton Cuse, based off of the best-selling The Strain Trilogy by del Toro and Chuck Hogan, was the most-watched new cable drama of 2014.

As the second season unfolds, the transformation has begun. It can no longer be denied — New York City is rapidly falling to an evil epidemic, and no one is coming to its rescue. Its citizens must fight or die. Dr. Ephraim Goodweather (Corey Stoll) and his unlikely allies tried to take down the embodiment of this evil — the Master — and failed. Now Eph and Dr. Nora Martinez (Mia Maestro) concentrate on creating a biological weapon to wipe out the creatures, while Abraham Setrakian (David Bradley) searches for an ancient book he hopes will reveal the strigoi’s entire history…and possibly a way to kill them. Meanwhile, the Master is out for revenge, unleashing new and even more terrifying breeds of bloodthirsty creatures after our team.  Our team must find a way to defeat him before the infection spreads too far and becomes irreparable … before they become monsters themselves.

Season two of The Strain joins FX’s summer lineup, which begins with the television premiere of Louis C.K.’s latest standup special Louis C.K.: Live at the Comedy Store on Thursday, May 28 at 11 PM e/p, immediately following the Season 5 finale of Louie. Tyrant returns for its second season on Tuesday, June 16 at 10 PM e/p. The series premiere of Denis Leary’s new comedy Sex&Drugs&Rock&Roll on Thursday, July 16 at 10 PM e/p will be immediately followed by the premiere of the second season of Married at 10:30 PM e/p.

FX is the flagship general entertainment basic cable channel of FX Networks, a business unit of 21ST Century Fox. FX Networks is comprised of FX, FXM and FXX. Launched in June of 1994, FX is carried in 95 million homes. The diverse schedule features a growing roster of critically-acclaimed and award-winning hit dramas series including The Americans, Tyrant, The Strain and the upcoming Taboo; the critically-acclaimed miniseries American Horror Story, Fargo and the upcoming miniseries American Crime Story; acclaimed hit comedy series including the award-winning Louie, Archer, Married, The Comedians and the upcoming Sex&Drugs&Rock&Roll and Baskets. FX is the former home of the critically-acclaimed and award winning hit drama series The Shield, Nip/Tuck, Rescue Me, Damages, Sons of Anarchy and Justified. The network’s library of acquired box-office hit movies is unmatched by any ad-supported television network. FX’s roster of acquired hit series includes Two and a Half Men, In Living Color and Mike & Molly.