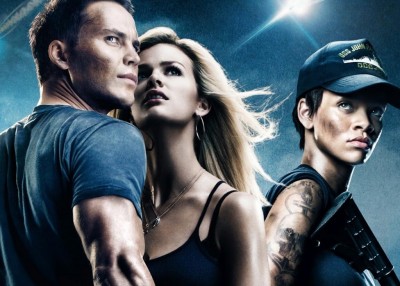 As a visceral thing, the idea of making board games into Movies offends me on so many different levels. Its shows how creatively bankrupt Hollywood has become that they think that because people play a game like Life, Chutes and Ladders, or Monopoly that somehow there is material there for a movie.  When I heard there was a Battleship movie, based on the Hasbro game, I was not enthused. Then I saw the first trailer and thought, hmm. Could this movie possibly be better than it has any right to be?

Battleship starts off slow. We meet the lost soul, Lieutenant Alex Hopper (Taylor Kitsch) as he celebrates his 26th birthday.  To date he hasn’t done anything with his life and is stuck living on his brother’s couch. His brother happens to be a Navy Commander Alexander Skarsgård. After another run in with the law he forces his brother to join the Navy.

I always preach the benefits of casting unknown actors in films and this is a prime example of both the pros and cons of it.  The audience has to get to know them. The opening 10 or 15 minutes of this movie was painful to watch, especially the first time we meet Hopper’s true love Samantha Shane played by Brooklyn Decker and the first few minutes of Pop Star Rihanna’s big screen debut as one of the Navy Midshipmen. 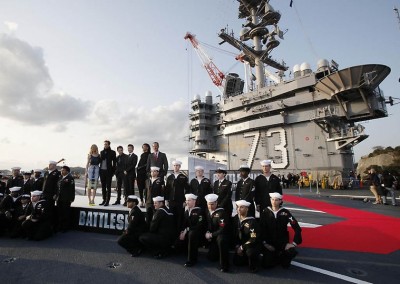 The movie really takes off once we get to the Navy and we get to see the Navy’s “Fleet Week” (Not sure what it’s called) in Hawaii where various fleets from around the world come to Hawaii to compete and showcase their ships and crew. Battleship really shines in these scenes; Berg clearly loves all things Military.

He treats every shot of the various battleships and crews with reverence; you can’t help but get caught up in his obvious enthusiasm for this subject matter. This movie is Berg’s love letter to the military. This movie could almost serve as a recruitment film like Top Gun or Officer and A Gentlemen did back in the day. I almost wish I had joined the military for that kind of camaraderie. 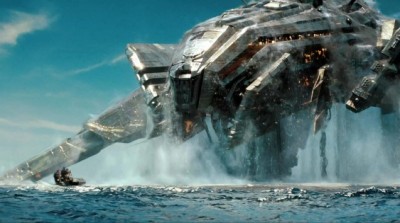 Berg really took the time to build and establish all the characters and their relationships.  Its not that these people did nor even said anything memorable, they were just really likable and felt comfortable. Here’s the secret to movie making – you are able to overlook a lot, if the characters are interesting, and its directed and shot well. I don’t need over the top Shakespearean drama to enjoy something. I just need to care and I did.  Yeah this movie has its share of hokey moments, like the crippled ex army vet (played by real life Army Vet Gregory D. Gadson) who literally punch out an Alien, or any scene with Rihanna. Somehow, it all worked.

I kept thinking, we don’t even need the Aliens or the Battleship part of the movie. It was just going to bring down everything that this movie spent an hour building. However, when the Aliens did come, I felt fully invested in the characters and the “world” that Berg and his crew established.  The silliness of the Alien attacks worked for me in that mindless, summer blockbuster way.

Director Peter Berg has done the impossible he made a damn good movie based on a board game!