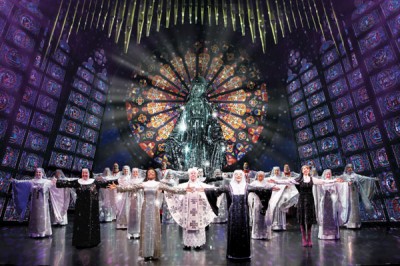 The National Tour of the long-running Broadway musical Sister Act The Musical has stopped at Washington, DC’s John F. Kennedy Center for the Performing Arts. The show, based on the hit movie, is a comedic romp that walks the fine line between treating religion with respect and poking lighthearted fun. It also doesn’t take itself or Broadway conventions too seriously. Cheri and Bill Steinkellner’s book features original music by legendary composer Alan Menken. Director Jerry Zaks infuses this production with energy and fun.

Ta’Rea Campbell, best known for playing Nala in the Broadway and touring production of The Lion King, stars as Deloris Van Cartier, a Philadelphia lounge singer who witnesses her boyfriend Curtis (played by Melvin Abston, also from the national touring production of The Lion King) kill a man. Officer “Sweaty” Eddie Souther (Chester Gregory) hides her in a church. Watching the culture clash between modern party girl Campbell and the stodgy, old-school Mother Superior (Hollis Resnik) is fun.

The relationship is challenging and is the show’s heart – and sometimes its flaw. Not enough time is spent with the other nuns and therefore we don’t discover what really makes them tick. They come across as caricatures and part of the background.

We do get one really nice moment when we see the shy Mary Robert (Ashley Moniz) break out of her shell and start to challenge Mother Superior’s authority. Her plea to Deloris to take not leave her in the song The Life I Never Led is one of the show’s most heartwarming moments.

Mary Robert isn’t the only character who wants to be heard. Sweaty Eddie had a crush on Deloris since their high-school days. In the song I Can Be That Guy, he pleads to no one in particular that he can be the man who isn’t afraid to stand up and let his voice be heard. The song is a complicated mix of R&B and pop. Abston truly shines in this moment; he hits several different ranges and tonal shifts all while doing a comedic dance. It is one of the highlights.

This show is all about accepting change and becoming better than you thought you could be, whether through a religious calling or something that comes from deeper inside. It is a good, positive message – even though it does seem to take the idea of murder a bit lightly.

It is easy to recognize the Menken touch in songs like How I Got The Calling, Raise Your Voice, Sister Act and Bless Our Show, but others are surprisingly soulful, and dark and lighthearted at the same time. It is Menken experimenting a bit outside his box.

On When I Find My Baby Curtis waxes poetic about how he knows Deloris inside and out with a feeling of “love,” but the lyrics are about how he will kill her when he gets her in his arms again. “When I find my Baby, I ain’t going to let her go. I’m going to shoot that girl. I’m going to stab that girl. I’m going to disembowel that girl…” Between the tone, the lyrics and the goofy dancing it is a schizophrenic number. Not that I didn’t love it, it was just a bit much. The next minute they are singing about raising your voice to heaven in the song Raise Your Voice.

The themes, music, comedy and sarcastic nature of the show clash. It makes for a spicy stew that works in individual spoonfuls, but not really as a whole bowl.

The National Tour of Sister Act The Musical is currently playing in The John F. Kennedy Center for the Performing Arts: Opera House until November 10th.  Visit sisteractbroadway.com for tour schedule.