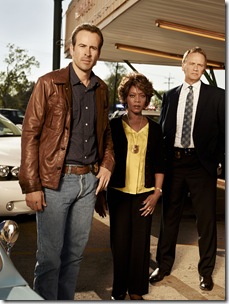 One of the cooler cop shows to debut over the last few seasons, Memphis Beat [TNT, Tuesdays, 9/8C], is back and more soulful than ever. In the second season premiere, At the River, detectives Dwight Hendricks and Charlie ‘Whitehead’ White are split up as Internal Affairs looks into the actions of a murdered police officer.

When a police officer is found dead of a gunshot, and Internal Affairs is investigating whether he was dirty, 7th Precinct commander, Lt. Tanya Rice [Alfre Woodard] splits up Dwight [Jason Lee] and Whitehead [Sam Hennings]. She assigns Dwight to work with IA’s detective Claire Ryan [Beau Garrett] while she and Whitehead work together on the case, separately.

A lead turns up linking the dead officer to a white supremacist group and, coupled with a disconcerting discovery in his garage, makes IA’s case look pretty good – but Dwight’s refusal to jump to conclusions leads to some interesting situations. Meanwhile, Lt. Rice is letting Whitehead know she does not think highly of his work…

At the River plays off Dwight’s history [his father was killed on the job] when he meets the dead officer’s son and determines to make sure he sees his father as a hero – not a dirty cop. At the same, Whitehead looks upon Rice’s disfavor as a challenge and works hard to persuade her that he’s not ‘coasting.’

While the plots of most Memphis Beat episodes are similar to those of most cop shows, they are leavened by being set in Memphis. The music, the food and the sheer soul of the place are characters as much as Dwight, Whitehead and the rest of the cast. This brings a freshness to the proceedings that makes the series both quirkier and warmer than most procedurals.

The excellent supporting cast – especially D.J. Qualls as Officer Davey Sutton, and Celia Weston as Dwight’s mom, Paula – add moments of depth and breadth even when they aren’t given larger roles in an ep. Weston makes her two scenes especially poignant, and Qualls, who does an unexpected bit of work on the case, shine.

The introduction of Detective Ryan – who seems to be positioned as a potential love interest for Dwight [adding a Capulet/Montague level insofar as the fractious relationship Internal Affairs has with most cops] – is intriguing. Garrett, most recently seen in TRON: Legacy, does a lovely job of portraying the slightly overeager Ryan who needs some counsel from Lt. Rice before she antagonizes the precinct beyond hope of redemption.

At the River is typical of the series – smart, funny, poignant, a bit odd. The writing is sharp without being too pointed; the pacing is a hair above leisurely, but never drags; the brief montages of Memphis shots give the ep a distinctive feel, and the result is an hour of television that may not be full on brilliant, but is much better than average. Plus, it has the presence of an old friend we’ve just made – if you know what I mean.

Photo by Justin Stephens/courtesy of TNT