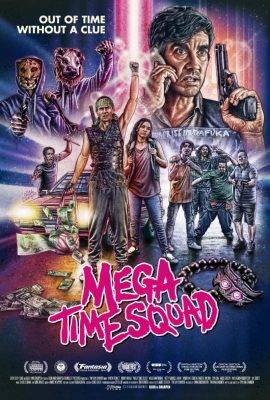 Mega Time Squad is a low budget science fiction dramedy about a guy who masterminds (if that’s the right word) the theft of Chinese money in the small town of Thames in New Zealand.

The ramifications of the theft play out in witty multiples thanks to an ancient Chinese bracelet he lifted from the pawn shop that is a front for the Chinese organization.

John (Anton Tennet, Romeo and Juliet: A Love Song) is an errand boy for small-time gangster wannabe Shelton (Jonny Brugh, What We Do in the Shadows). 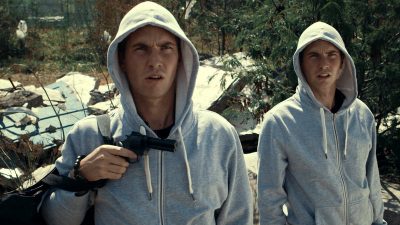 When he’s given orders to rip-off money from Chinese crime boss Wah Leee (Tian Tan, The New Legends of Monkey), he convinces his best mate, Gaz (Arlo Gibson, Shortland Street) to help him rip-off both Wah Leee and Shelton.

In the process, they face Wah Leee in his antiques shop – where John also picks up a mysterious bracelet he hopes to give to a girl he likes.

In the aftermath of the theft, Gaz rats out John to Shelton and John, fleeing Shelton’s goons, pushes a green button on the bracelet and goes back in time to before he got caught. 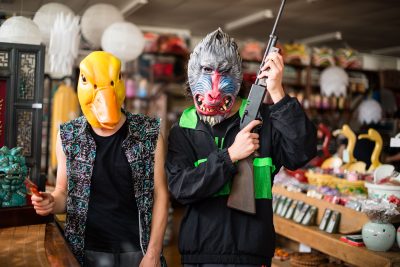 In farces – and a weirdly large number of cartoons – there’s a convention where numerous characters chase/are chased through a set with an inordinate number of doorways, always just missing each other until the set pieces punchline.

Mega Time Squad is pretty much that for the bulk of its brief (89 minutes) running time.

Despite warnings that use of the bracelet to circle back on himself would unleash a demon that would devour all, John/the Johns keep circling back until there are several of him (five, I think – it could be six; it gets complicated).

There is, of course, also the abovementioned girl – Shelton’s sister Kelli (Hetty Gaskel-Hahn, Shortland Street), who apparently has a way with explosives.

Between falling in love with Kelli, evading Shelton’s goons and trying to get the money to pay back Wah Leee, Mega Time Squad milks the multiple Johns and their evolving crises to full advantage – while taking a shot at American gun laws and the idea that none of the Johns is precisely identical to the original.

Written and directed by Tim van Dammen (Romeo and Juliet: A Love Song), is a fast-paced crime/time travel dramedy that certainly has a Kiwi sense of humor – with two of the biggest laugh-out-loud moments coming from Wah Leee and his number one, Wen (Yoson Wan, Mortal Engines). 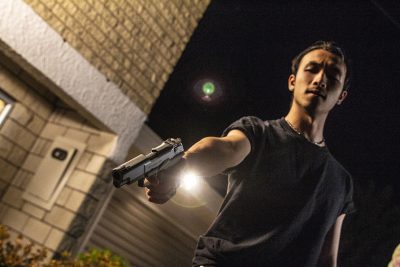 Fueled by energetic performances from Tennet and the rest of the cast, Mega Time Squad takes the most inept criminals since The Gang That Couldn’t Shoot Straight and tosses them into a time travel loop with genuinely funny results.

Mega Time Squad is in theaters and On Demand today.