Marvel’s Black Panther follows the basic plot structure of the studio’s other movies (hero arises; hero faces obstacles and loses; hero finds a way to overcome said obstacles) – but there are only so many stories (back in high school literature class the number seven was mentioned), so the differences have to come, largely, from point of view.

Black Panther’s point of view is unique – a superhero who is the latest in his country’s line of hereditary monarchs – and African.
Marvel may have taken its time to bring the Black Panther to the screen, but it took the time to get it right.

Black Panther opens with a brief history lesson – the story of Wakanda, an advanced country that has become powerful thanks to Vibranium (an extraterrestrial element that contains great power) – before getting to the real story.

In Oakland of 1992, King T’Chaka (John Kani) makes a terrible choice – one that comes back to haunt his son, T’Challa (Chadwick Boseman), in the present.

Cut to Wakanda of the present – where T’Challa is about to become king. 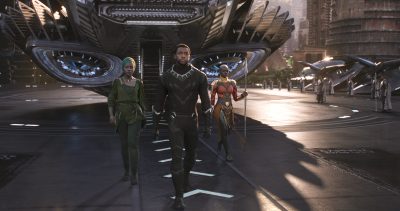 The ceremony removes his powers and allows him to commune with the spirits of his ancestors – but it also allows for anyone with a legitimate basis to challenge him for the throne. In this, case, M’Baku – leader of the Gorilla Tribe (there are several tribes among the Wakandans).

This is the part where the hero rises.

When T’Challa gives his word to childhood friend and head of another tribe, W’Kabi, (Daniel Kaluuya) that he will bring Ulysses Klaue (Andy Serkis) back to Wakanda to face justice for stealing a small amount of Vibranium and selling it to outsiders, he faces the first challenge that he fails.

After a sequence that rivals James Bond for spycraft and mayhem, he fails – because an American mercenary, known by the nickname Eric Killmonger (Michael B. Jordan) saves Klaue for his own reasons (namely to challenge T’Challa for the throne). 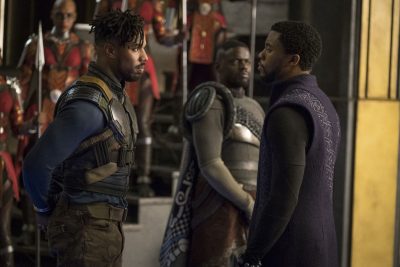 Although satisfying the tropes of the superhero genre, Black Panther looks and feels different. The scriptwriters and director are African-American; production design is authentically African; the cast is mostly African-America – the only two white characters are Klaue and CIA agent Everett K. Ross (a former ace pilot); most of the exteriors are shot in Africa, and the usual superhero pacing is greatly enhanced by a score that is heavily influenced by African instruments and rhythms.

Although Serkis and Jordan are prime examples of two types of villains (the sneaky smart and the smart and powerful), even their turns onscreen are second to Boseman’s T’Challa – and the smart, beautiful, capable women who play pivotal roles.

Angela Bassett brings dignity, intelligence and determination to T’Challa’s mother, Ramonda; Danai Gurira is loyal and proud and powerful as the head of the king’s personal guard, Okoye; Lupita Nyong’o’s Nakia – T’Challa’s former lover – is a match for Okoye in every regard but sports a sense of humor and passion that aren’t immediately evident in the head of the royal guards.

The plum female role, though, turns out to be T’Challa’s sister, Shuri – an inventive genius who would be the equivalent of Q in a Bond movie (if Q was the head of MI-6). Letitia Wright (Humans, Black Mirror) is a revelation as Shuri – she, not her brother, is the film’s heart and soul. 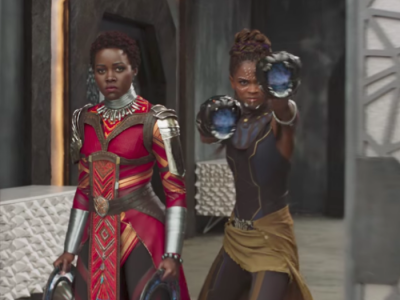 Her loyalty to her family; her sense of playfulness, and her ability to adapt to any situation make at least as much of a force as the film’s other prominent female characters.

Jordan brings a world of pain and frustration to Eric – as a result of T’Chaka’s fateful decision, he becomes T’Challa’s ultimate antagonist – a powerful, prideful, ethics-free wound on two legs, with a legitimate claim to the throne.

Unusual as it might seem at first, the fact that Agent Ross gets to put his piloting skills to work on behalf of T’Challa is not a case of the white savior. His contribution is only possible through an invention of Shuri’s and is not a deciding factor.
That is refreshing.

Something else that’s refreshing is the way Black Panther looks. As I’ve mentioned, the production design is different – more colorful; more beautiful and more area specific than we’ve seen in most earthbound Marvel films. 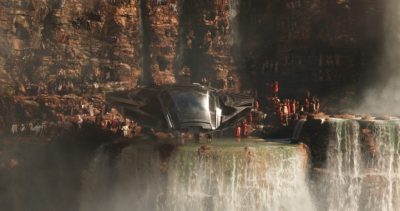 The costumes are unique and brilliant and functional. The Black Panther’s costume is even more high-tech than the one we saw in Captain America: Civil War – and even cooler looking.

The cinematography, by Rachael Morrison (who worked with Coogler on Fruitvale Station and Dee Rees on Mudbound), is breathtaking – she captures the spirit of the wilds of Africa while also framing the film’s action sequences beautifully.

Speaking of action sequences, it might seem a bit weird, but as impressive as they are (and make no mistake – they are amazing), they feel incidental to the story. That’s how good the script (by Coogler and Joe Robert Cole) is. The world of the Wakandans is so different, and the characters so well drawn (it feels like every notable character has a unique and well developed arc) that interactions of the characters – action sequences aside – is genuinely compelling. 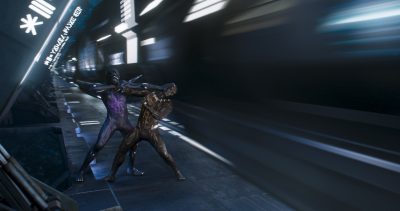 Ryan Coogler has shown us he can direct a quality film on a low budget (Fruitvale Station) and a moderate budget (Creed). Now he’s done it again with a Marvel budget.

Marvel’s Black Panther is one of the best of the Marvel films. It’s as fresh as Iron Man was when it came out, or Captain America: The First Avenger, or The Avengers, or Ant-Man, or Guardians of the Galaxy.

Outside of the required heroics, none of those films are like the others.

Marvel’s Black Panther is right at home in its unique niche in the Marvel Cinematic Universe – and anywhere else it wants to be.
Final Grade: A+