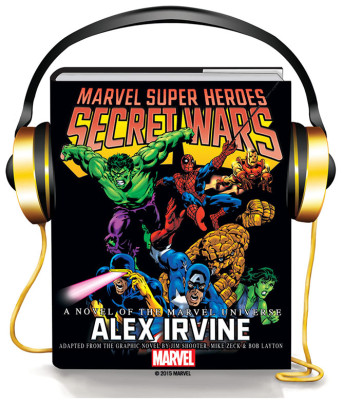 One of the biggest comic events in MARVEL’s history now available in GraphicAudio® A Movie In Your Mind® Audiobook Format.

New York, NY – February 18, 2015 – GraphicAudio® A Movie in Your Mind® in conjunction with Marvel brings one of thebiggest comic events in MARVEL’s history, to life. With full cast recordings, outstanding sound effects and cinematic music, listeners are transported into the Marvel Universe. MARVEL SUPER HEROES SECRET WARS, based on the classic Marvel story line celebrating its 30th year anniversary in an amazing audio production, starring the Marvel heroes you know and love.

In MARVEL SUPER HEROES SECRET WARS written by Alex Irvine, the fate of the entire Marvel Universe hangs in the balance as Earth’s mightiest heroes face their greatest challenge! Summoned across the stars by the mysterious and unbelievably powerful Beyonder, the Avengers, Spider-Man, the Fantastic Four and the X-Men are set against their deadliest foes on the mysterious planet known as Battleworld – with the winner promised the ultimate prize. But as battle lines are drawn, new alliances are forged and old enemies clash, one among them is not willing to settle for anything less than godhood. Can even the heroes’ combined might prevent Dr. Doom from becoming the most powerful being in the universe?

MARVEL’S THE WATCHER Host Lorraine Cink and crew recently filmed a Behind the Scenes and Making of MARVEL SUPER HEROES SECRET WARS segment at the GraphicAudio Studios in Bethesda, Maryland for their weekly web series which will air  in February.  Lorraine and crew even got to experience recording some lines which will be included in the GraphicAudio’s final SECRET WARS production.

Available from www.GraphicAudio.net and via the FREE GraphicAudio Access™ Mobile App which allows customers to directly download titles on their Android or iOS smartphones and tablets.