Oishinbo is a long-running manga series that encompasses more than one hundred issues in Japan. Perhaps it’s because VIZ Media is uncertain about the North American reaction to a manga about the world of cooking and food culture, but the North American market they have chosen to publish a kind of “greatest hits” series of select stories taken from the series and present them in “a la carte” editions. Japanese Cuisine in the first in this unique series and the unique challenge presented to an estranged father and son. 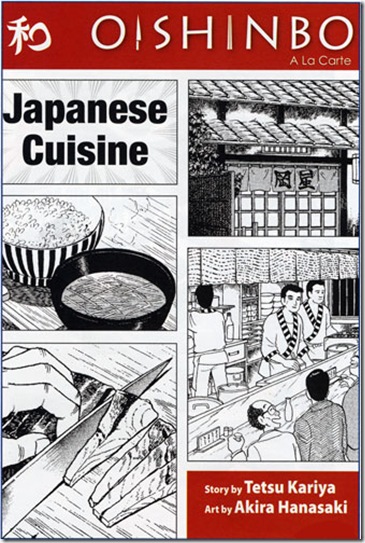 Kaibara Yuzan is the father – an artist and founder and director of The Gourmet Club. Yamaoka Shiro is the son – he’s a journalist for the Tozai News. They are estranged because of both their headstrong personalities and because Yamaoka destroyed all of his father’s paintings and pottery to punish him for always placing his family second to his obsession with food. When Ohara Daizo, publisher of the Tozai News, places Yamaoka in charge of the Ultimate Menu Project and asks Kaibara to work with his son, the reaction is not what he was hoping for.

Japanese Cuisine is not just a tale about the creation of a menu – it’s about the kind of people it takes to do things right, and whether Japan even has a cuisine. In the pages of this manga you will find intriguing and entertaining characters who grow as people even as they learn about Japan’s food and food culture. The manga starts off with two sashimi recipes before the story even begins – and within the pages of the manga, we learn why what appears to be so simple is really not.

Between the ongoing clash between father and son, and the responses of their friends and colleagues, we learn as much about Japanese culture as its food. Oishinbo A la Carte: Japanese Cuisine is an enthralling look at Japanese culture from a perspective we’ve never seen before. Tetsu Kariya [story] and Akira Hanasaki have created something, here, that is not just extremely good, but something that is genuinely unique.