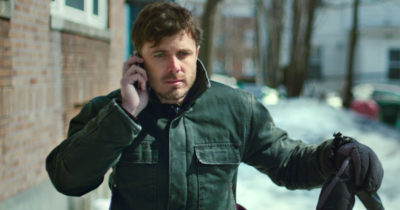 Lee Chandler is a quietly surly misanthrope who works as the handyman/building manager of four apartment blocks in Boston when his brother’s death brings him home to Manchester. His brother’s will names him guardian of son Patrick.

Manchester by the Sea opens with scenes of Lee (Casey Affleck) working – shoveling snow making repairs for tenants and,  when one woman asks something entirely inappropriate, replying with an explosion of crude language that gets him chewed out by the buildings’ owner. He gets into a bar fight over nothing.

Likable he is not.

The news of his brother Joe’s (Kyle chandler) death brings him home where there is clearly some history. His brother’s will names him as guardian for Patrick (Lucas Hedges) – something he is ill-prepared for and determined to avoid, claiming he’s entirely the wrong person for the responsibility.

All of this is at odds with flashbacks in which we see Joe and Lee and young Patrick on the family’s fishing boat having a great time. Back then, Lee was the cool uncle, the fun one. 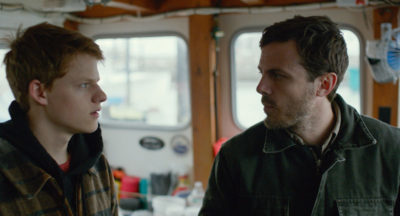 We even see Lee with his wife, Randi (Michelle Williams) and kids – and he’s a great husband and father.

Patrick has grown into an independent young man – he’s on the school hockey team; he’s in a band – he has two girlfriends (who don’t know about each other).

When confronted with the possibility that, with Lee as his guardian he’d have to move to Boston, he lists the above as some of the reasons he really doesn’t want to do that.

Finally, Lee agrees to move back to town and that leads to dealing with this smart, tough and headstrong young man. He’s right that he’s not really the guy to do that, but between the two of them they manage to settle a bit.

Writer/director Kenneth Lonergan builds Manchester by the Sea in slowly increasing layers – moving from introducing Lee as he is vs. who he was; having the people of the town talk about ‘the Lee Chandler’ (Patrick’s teammates talk about him, discounting the talk as an urban legend); bringing Lee and Patrick back into contact and contrasting them with each other – and who they were in the flashbacks. There are reasons why Patrick’s mother, Elise (Gretchen Mol), isn’t even considered as a possibility as his guardian. 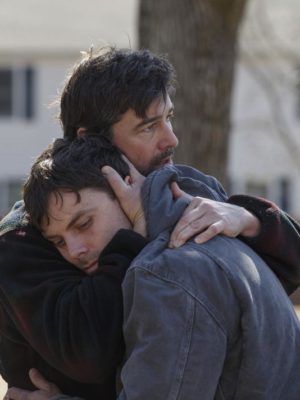 Then, when the layering reaches a certain point, we learn why Lee has become the person he is. It’s a tragedy that is completely devastating. It changes everything we feel about Lee even as it helps us understanding how the fun uncle became the misanthrope.

That Lee is even able to be convinced to try being Patrick’s guardian is a huge step for him – and slowly finding a way to so that without causing more than a minimum amount of upheaval in Patrick’s life is a definite step forward – especially considering who Patrick has become.

With Lonergan at the wheel, though, this is not a film that is going to come to anything even remotely resembling a Hollywood ending.

Despite Lee’s efforts and growth, he never really fits in – and though he and Patrick overcome some major hurdles (the family fishing boat, though a source of many happy memories and a supplemental income, is a huge problem to them with their limited budget – this being the middle of the winter off-season), things working out for the best don’t necessarily mean what an audience might be hoping for.

This is underscored by two important, and deliberately awkward, scenes. The first is between Lee and Randi – the two are in diametrically opposed places in their lives; the second is between Patrick, his mom and – coming as a real surprise to everyone including Patrick – his new stepfather (Matthew Broderick). This scene could possibly have been removed from the film and it wouldn’t have mattered, but it serves as a counterpoint to what we’ve heard about Elise and shows, again, that she’d be the wrong choice for Patrick’s guardian. 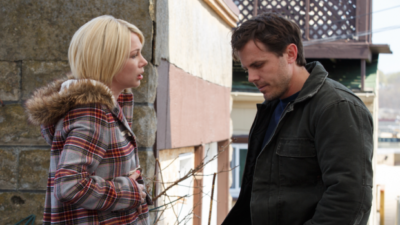 Despite fine work by the entire cast (including Williams, whose work doesn’t usually appeal to me), Manchester by the Sea is two-hander, carried by Affleck and Hedges.

Affleck gives Lee a scruffy edge – he talks just a bit off; he has little mannerisms that that don’t make sense until that mid-movie revelation; he maintains an undercurrent of melancholy and self-loathing even things are looking positive. It’s a fine performance that has garnered plenty of awards notice and an actual award or two.

Hedges takes everything that drives a teenager – hormones, the need for some independence and the need for recognition from his peers – and layers in a well-controlled (for the most part) rage and matches Affleck’s melancholy undercurrent with one of his own. His performance is every bit as affecting as Affleck’s (and he, too has gotten some awards notice and at least one important award).

There are moments in their relationship that harken back to those flashbacks – the fun uncle and enthralled kid – but only enough to show that they are, however much they’ve changed in the interim, still the same guys. The only differences are those (again) layered in by time and experience.

Manchester by the Sea is not a delightful film, or an entertaining holiday romp. It is hard and harsh and not to be ignored. It says that it’s okay to be broken. It is a brilliant film.