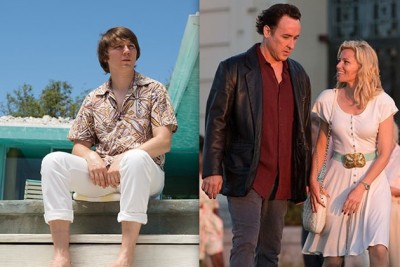 Brian Wilson is a genius. The scope and quality of the music he’s composed over his lifetime is testament to that. For a long time, he was a tortured genius.

Love & Mercy is Brian Wilson’s story and, unlike a lot of biopics, it doesn’t gloss over anything – Wilson has described it as ‘factual’ in a number of interviews since it was made. It is an absorbing look at Wilson’s life – as much of a look as can be covered in a couple of hours – and it one of the best biopics movies in years.

The music of The Beach Boys – that cheerful, exquisitely crafted combination of harmony vocal arrangements draped over classic rock & roll riffs – will probably live forever. Everyone has heard a Beach Boys hit and hummed along – their music just feels so happy and welcoming.

Most of the best Beach Boys material was composed by Brian Wilson – and to listen to it, you’d never know that much of his life was lived with mental illness, or that even his earliest work was overshadowed by his abusive father.

Love & Mercy covers Wilson’s life as part of the Beach Boys and the part of his life since he met his second wife, Melinda Ledbetter (Elizabeth Banks). The young Wilson is played by Paul Dano; the older Wilson is played by John Cusack. The two look nothing alike, but each brings a truth to the film that supersedes any purely physical limitations.

Love & Mercy opens with Wilson as a figure kind of off center on the frame. His psychiatrist, Dr. Eugene Landy (Paul Giamatti), Wilson and a bodyguard visit a luxury car dealership because Landy wants to buy a car. While he’s doing that, Wilson decides he wants to buy a big old Cadillac and Ledbetter is willing to sell it to him. It’s the start of a beautiful relationship.

Juxtaposed with that is a look at the young Wilson, as part of the Beach Boys – living large, hitting the beach, meeting girls and generally seeming to be wealthy and carefree.

As the film progresses, though, we witness Landy’s terrible treatment of Wilson juxtaposed with Wilson declining to join the group on tour so he can write the music he hears in head – movie and sounds that are very different from what he’s done before.

We watch the shy, hesitant older Wilson getting to know Ledbetter and the young Wilson dealing with his father and facing possible mutiny from the band (they do not like the direction his music is taking).

Finally, we see Ledbetter trying to convince Wilson’s family that he needs help – thanks to Landy, he’s estranged from them. It’s a miracle that he’s even be able to get to know her – and, in fact, it’s Landy’s ruthless declaration that she can’t see Wilson anymore that provokes her into taking action.

Love & Mercy can, at times, be very difficult to watch. Writers Oren Moverman (Time Out of Mind) and Michael Alan Lerner never candy-coat any of the negatives in Wilson’s life (Wilson’s dad casually informing him that he’s sold the entire Beach Boys catalogue for a piddling sum; Landy raining abuse on the older Wilson) – and director/producer Bill Pohlad (12 Years a Slave) carefully frames the story to create maximum emotional impact without ever seeming exploitative.

Dano brings Wilson’s vulnerability and increasing instability a quiet force that will catch audiences off guard. His descent into madness is wrenching.

Cusack, on the other hand, gets to take Wilson from his own personal heart of darkness into something approaching sanity (Wilson has said in recent interviews that the voices in his head will never completely go away) and happiness (Wilson and Ledbetter are still married and have a thriving family). We’ve seen brilliant work from Dano and Cusack before, but in capturing the shadings of Brian Wilson’s life, they’ve gone to places we’ve never seen them reach before.

The real revelation, though, is Banks. She gets to display quite a dramatic range as Melinda Ledbetter and never, for a second, strikes a false note. She might not get an Oscar® nomination for Best Supporting Actress, but it certainly wouldn’t surprise me if she did.

The finishing touch is Brian Wilson singing Love & Mercy over the closing credits. He seems to be happy and relaxed and enjoying himself. It’s as though he’s giving the film his personal stamp of approval.