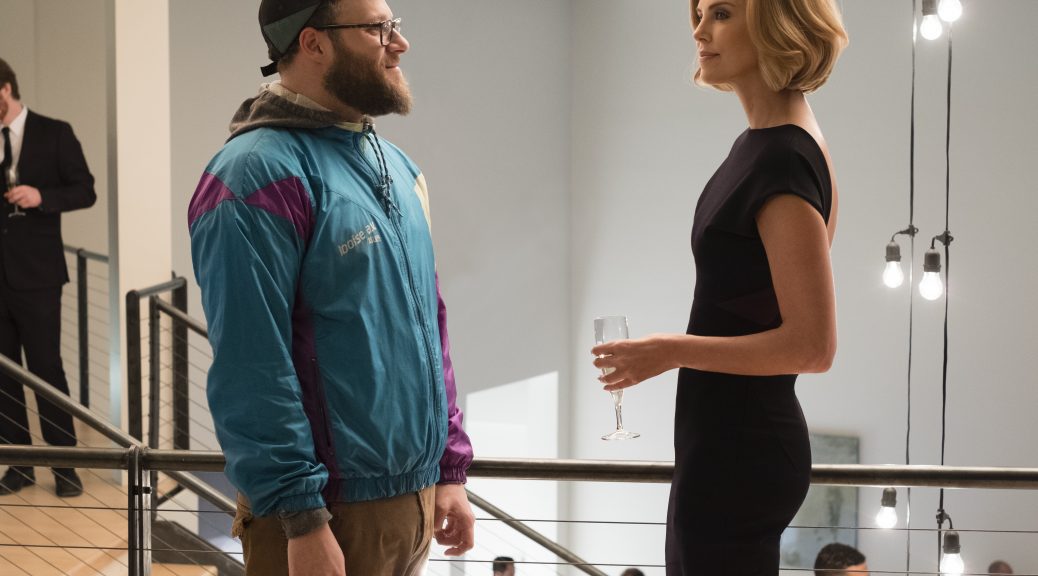 The newest film from the producing team of Seth Rogen and Evan Goldberg is an R-rated male fantasy enclosed within a political rom-com.

The premise for Long Shot is that the Secretary of State and the guy she babysat twenty-five years ago fall in love while she is trying to put together an environmental program together (and planning to run for president if she succeeds).

So, a political satire interwoven into a romantic comedy.

Fred Flarsky (Seth Rogen) is a journalist whose publication is bought out by a Rupert Murdoch type (Andy Serkis) who will turn it into a privileged old white guys propaganda rag.

He finds this out as he returns to the paper following an attempt to get the goods on a white power group – and is so pissed off about the new ownership that he quits.

When Fred’s best friend, Lance (O’Shea Jackson Jr.), takes him out on the town to cheer him up, he winds up at a posh gathering to hear Boyz 2 Men – a gathering at which he spies Charlotte Field (Charlize Theron). And she sees him…

Despite the best efforts of her advisers – Maggie Millikin (June Diane Raphael) and Tom (Ravi Patel), she enlists his aid to craft her speeches.

Intimacy and hilarity (and some very genuine poignancy) ensue.

Long Shot refers both to Fred’s chances with a woman who is so far out of his reach that there are multiple zip codes involved, and to Charlotte’s apparent chances at winning the presidency.

What makes Long Shot different is twofold: the set up – the way the Fred and Charlotte relationship evolves, and the political satire.

Well, those two things and Rogen’s tendency to revel in R-rated romps: the fluidity of his usage of foul language is almost Shakespearean, and he has never met a gross out gag he wasn’t willing to try (one scene in Long Shot rivals the infamous hair product gag from There’s Something About Mary).

Combine that with Ms. Theron’s ability to match Rogen’s performance beat for beat – while remaining elegant and classy (a trick very few actors of either sex could pull off) – and add some sizzling chemistry, and you have a riotous entertainment.

Raphael’s Maggie is also a work of supporting art as she works hard for Field and doesn’t hesitate to try to get Flarsky out of the picture.

And Tristan D. Lalla, as one of Field’s security detail, steals every scene he’s in with either terse one-liners or reaction shots.

It doesn’t hurt to have a really sharp script (courtesy of Dan Stirling and Liz Hannah) as a base for Rogen and Theron to riff on (there is, undoubtedly, some improv going on here), and well-paced direction from Jonathan Levine (The Wackness), either.

Long Shot is just the latest rom-com to play with the idea of a guy doing much better, romantically, than one would expect.

It’s also one of the best.