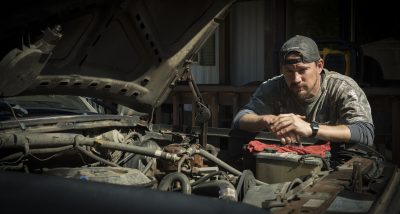 Steven Soderbergh is back from his retirement from filmmaking four years ago – with a fierce heist flick that gives Channing Tatum and Daniel Craig a chance to have some real fun.

Logan Lucky is about a heist by a group of redneck/hillbilly/good ole by types who look and sound dumb – but probably ain’t!

Logan Lucky opens with Jimmy Logan (Channing Tatum) repairing his truck with the aid of his daughter, Sadie (Farrah Mackenzie). She clearly knows her way around vehicles and other maintenance and repair such as application of tile grout. She’s also, we learn, entered in the Miss Pretty West Virginia pageant. 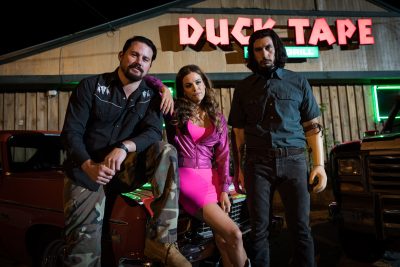 Then we witness Jimmy getting let from his job – the leg he injured playing football in high school counts as a ‘pre-existing condition’ for the company’s insurance provider.

About the same, Jimmy learns that his remarried ex-wife (Katie Holmes) is moving – her husband (David Denman) is setting up a new car dealership. Which means that he’ll have a much longer drive to visit her.

Thus, with all the odds already working against him, Jimmy decides to rob the Charlotte Motor Speedway – and idea he suggests to his brother, Clyde (Adam Driver) at the bar where he works. Clyde is notable for being a one-handed bartender (he lost the hand in his second tour of Iraq) – which leads to an altercation between Max Chilblain (a nearly unrecognizable Seth MacFarlane), an arrogant race car owner. 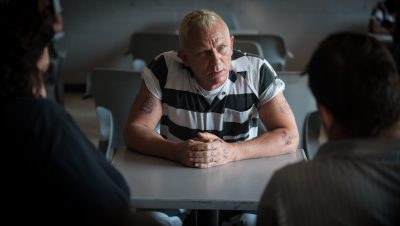 Jimmy knows how they move the money at the raceway from his job – and knows how to get around that – but he needs someone to blow the vault. Enter Joe Bang (Daniel Craig), whom the brothers must break out of jail – and return to jail – before anyone notices.

Once these seeming simpletons get to work, it appears that Jimmy has come up with a couple pretty terrific plans – for getting Joe out of prison and for the actual heist.

There’s a fair of bickering and complaining – especially between Joe’s brothers – but things proceed extremely well. Until the big twist… 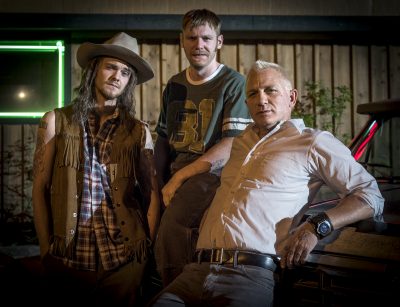 The credits say Logan Lucky was written by Rebecca Blunt, but knowing Soderbergh’s love of pseudonyms and predilection for writing, shooting and editing his films, one has to wonder if that’s the case here.

Even with the southern-fried accents and setting, the film moves like an Ocean’s Trilogy movie. The set-up is deliberately paced and allows for development of the main characters – plus side arcs with Jimmy’s daughter’s pageant, and his flirtation with a pretty healthcare worker named Sylvia (Katherine Waterson) – before shifting into a quicker pace as the plan is put into operation.

While the characters may lowbrow, the movie is clever and plays off Tatum’s natural charm and Craig’s smartly used charisma. The epilogue that just precedes the closing credits is a brilliant bit of added detail that explains the twist and sets the stage for a final scene that could be a bit of cliffhanger – considering the late entry of Hilary Swank as FBI Special Agent Sarah Grayson (who hates airtight alibis…).

Logan Lucky is a smart, funny film that may be the equal of Ocean’s Eleven.