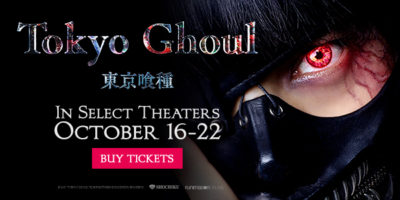 When a shy student named Ken Kaneki gets a date with a gorgeous girl he’s thrilled. Unfortunately, she only wants him for his body – as in lunch! She’s a ghoul – an undead flesh eater.

Fortunately, Ken escapes with his life, mostly – but now he has to survive in the world between human and ghoul in Funimation films’ live action adaptation of Sui Ishida’s popular manga series – coming to select theaters in October. Tickets are on sale now.

He Just Wants A Little Piece Of Mind

Riddled with gripping fight scenes and tasteful gore, this adaptation of Tokyo Ghoul brings the popular manga series to life like never before.

Buried in books and a quiet life, Ken Kaneki is all but dead to the world in an age where flesh-eating ghouls live among us. But when his only chance for survival is an organ donation that turns him into a ghoul-human hybrid, he finds sanctuary at Anteiku—a café run by the people he once considered monsters. Targeted by anti-ghoul forces, this safe house is up against a hunger more sickening than their own. When their most innocent members are threatened by humanity’s taste for vengeance, Kaneki will risk life and limb to protect the very world that changed his own.

Coming to select theaters 10/16-22 in English subbed! Go to funimationfilms.com/tokyoghoul to buy tickets!