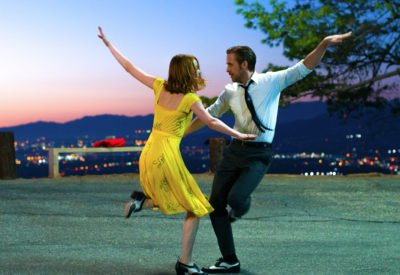 La La Land is a strange beast – influenced equally by Hollywood musicals like Singing in the Rain (to which there is a fun reference) and Jacques Demy’s The Umbrellas of Cherbourg – that is something more than mere colorful fun.

Damien Chazelle’s second film is the story of two struggling artists – jazz pianist Sebastian (Ryan Gosling) and wannabe actor Mia (Emma Stone) – who don’t exactly meet cute, then do before going on to have a very real relationship (cleverly camouflaged as piece of fluff musical).

From the opening sequence – a clogged freeway overpass filled with singers and dancers lamenting a traffic jam – where Sebastian and Emma’s first (very) brief encounter is entirely negative; to the final scenes (in which our expectations are heightened and then thwarted), this is a unique film experience.

La La Land opens with that magnificently extravagant freeway sequence and then slips into a more intimate mode as Sebastian gets himself fired from a lounge act for not sticking to the playlist – just as Mia, hearing his piano from the street, walks into the bar as Sebastian storms out. 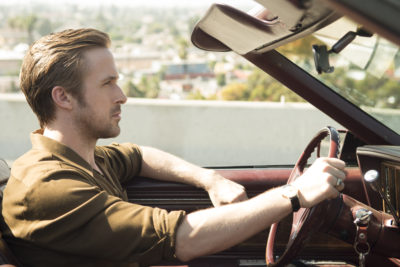 Somehow, they do get together and it’s magic.

She can’t get a part; he suggests she write her own. He turns down a good gig because it’s not his kind of jazz; she suggests he find a way to bring himself to the music. They support each other and things begin to happen in their lives because they listen to each other.

His gig leads to a lot of time on the road; her unsuccessful one-woman show gets her a part in a movie. Suddenly, they are caught in the world of competing and conflicting schedules.

Songs like City of Stars and Audition (The Fools Who Dream) capture the wistful optimism of love and the frustration of being turned down for part after part – and are key moments in Seb and Mia’s relationship. 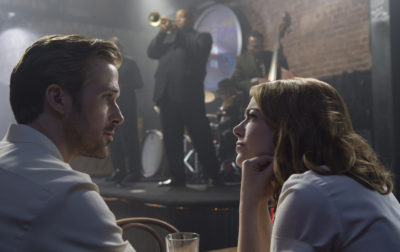 A sequence in a planetarium is just as romantic as a night under the stars would be – especially in Los Angeles, where the stars are rarely really visible.

The tension between Seb and Mia as their schedules keep them apart for longer and longer periods feels very true to life.

By the end of the film, one doesn’t know which sequences are ‘real’ and which are fantasy (a situation set up beautifully in the beginning with that traffic jam song and dance sequence shot on a real freeway – cleverly merging fantasy and reality).

Both Gosling and Stone are impressive in their singing and dancing – not because they have impressive voices, or dance chops, but because they don’t. They’re bringing a grounding to the music and dance that you probably wouldn’t get from more talented, well-trained singers and dancers – it’s that clever balance of reality and fantasy, again (for the record, while both are tuneful, Stone is the better singer, showing some unexpected power on Audition). 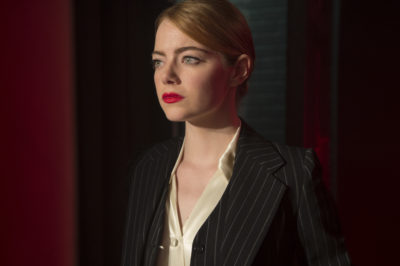 La La Land captures the rawness and vitality of first love and the love of movie musicals (and Los Angeles, the city) in a fresh and vital way. The cinematography and palette metamorphose between heightened reality and emphatic fantasy to bring a bit of grit to the more real moments and more wonder to the fantastic moments.

Supporting players include John Legend, Rosemary DeWitt, Finn Wittrock, Callie Hernandez, Sonoya Mizuno, Jessica Rothe, Tom Everett, Josh Pence, J.K. Simmons – but while they are all perfection in their roles, they are almost cameo performances. The film is about 80% Gosling and Stone – and they are brilliant.

I don’t know if La La Land heralds the return of the movie musical, but it really should.