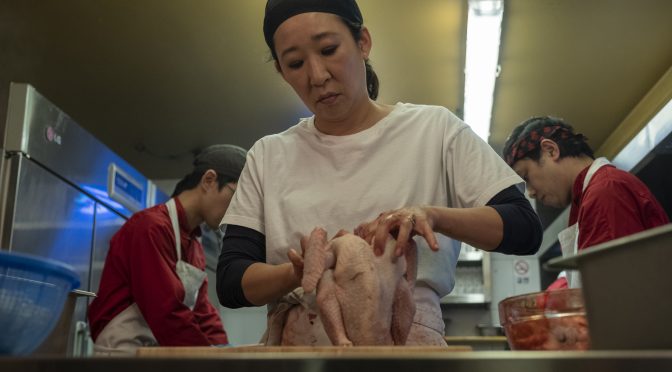 The third season of Killing Eve is as weirdly compelling as ever – even if its main characters – former MI6 analyst Eve Polaski and mercurial assassin Villanelle think the other is dead.

We know it’s only a matter of time before they cross paths again.

In the meantime, Eve (Sandra Oh) is working in a Korean restaurant and Villanelle (Jodie Comer) is attempting to get promoted to management – with the advice of new handler, Dasha (Harriet Walter).

The remaining former member of team, Kenny (Shawn Delaney), has gotten a job as an investigative reporter – at an ‘online publication’ where he can investigate what he likes.

Guess what he likes…

Eve’s former boss, Carolyn (Fiona Shaw), has been placed under the oversight of someone she can’t stand (an obsequious twit) and discovers she has no access to the resources she needs.

The season opens with an introduction to young Dasha working on the uneven bars and, rebuffing a would-be suitor with utter finality. As we learn that Dasha was also Villanelle’s trainer, that epic disposal makes more sense.

We also get another look at what might be one of the mother/son relationships on TV. As Carolyn and Kenny have what, for most families would be a monster blowout and, once it’s settled, Carolyn calmly asks if Kenny would like fish & chips for dinner. ‘Okay.’

In the first few episodes provided for review, Killing Eve once again balances laugh for tragedy and tragedy for laugh – while also balancing events in the lives of its characters.

The revelation – to each of our leads – doesn’t exactly spur immediate action, At least for Eve. She’s just too damned worn to initially give a damn – but Villanelle, well, let’s just say her behavior is as delightfully erratic as ever (much to Dasha’s consternation).

Besides our protagonists/antagonists (for Eve and Villanelle really are both), we get to check in on our old friend Konstantin (Kim Bodnia) and meet Kenny’s new workmates.

There are deaths – some novel and colorful, others not so much.

There is even a kiss – that unsettles both parties.

Eve’s world continues to be blues, blacks, greens and beiges; Villanelles’ remains colorful – whether achingly bright or pastel, she is surrounded by color.

While Villanelle is constantly shifting and adapting to new challenges, Eve remains the plodding, thorough investigator – a Javert who is a match for Villanelle’s Valjean.

Under the show’s third showrunner – Suzanne Heathcote, who wrote the season premiere – Killing Eve as lovely to look at as ever; as sprightly on its feet, and as smart as ever.