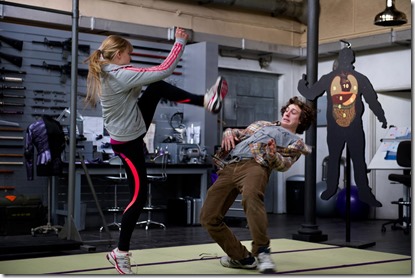 The sequel to one of the oddest comic book satires (from the satirical superhero comic of the same name), Kick-Ass 2 remains as faithful to the details of the comic as the original, but wildly misses on the tone. It’s a case of a well-directed film that features some bravura performances but loses its way in attempting to mix the inspired grotesqueries of the comic with a tone of gritty reality that turns it into a descent into over-the-top action/superhero cliché.

It’s a few years after the events of Kick-ass and Mindy Macready/Hit-Girl (Chloe Grace Moretz) is entering high school; Dave Lizewski (Aaron Taylor-Johnson) is a senior, but also trying to get back into the superhero game. He persuades Mindy to train him and gets pretty buff in the process, but she refuses to join him because she’s promised her guardian, Marcus Williams (Morris Chestnut) that she would give up the superhero thing.

Instead, Mindy gets to deal with her own unique problems when she seems to be accepted by the school’s mean girls – until she tops the leader, Brooke’s (Claudia Lee) efforts at the tryouts for the dance team. From then on, they are out to humiliate her – until she finds a comically appropriate, perfectly gross revenge – one of the few over-the-top bit that works.

So, Kick-Ass finds himself a new partner in Doctor Gravity – which, in turn, leads him to Justice Forever, a group of costumed do-gooders who were inspired by him: Col. Stars & Stripes (Jim Carrey), a former mob tough turned born again Christian; Tommy’s Dad and Mom (Steven Mackintosh and Monica Dolan), who became costumed heroes in response to the death of their son; Battle Guy/Marty, Dave’s best high school buddy (Clarke Duke); Insect Man (Robert Emms), who doesn’t wear a mask because he’s gay and that would feel like being in another kind of closet, and Night Bitch (Lindy Booth), who seems to be a bit of a Kick-Ass groupie.

One major highlight came in the first Justice Forever sequence, when everyone delivered their origin story. Let’s just say that one of the origins wasn’t like any of the others…

While Kick-Ass is making new friends (and actually doing some good by freeing some imported sex trade slaves), his old buddy, Chris D’Amico (Christopher Mintz-Plasse), aka Red Mist, has found some S&M gear in his newly late mom’s effects and tailored it as a costume for his new incarnation, The Mother… – and bought a team of costumed villains to help him get revenge for Kick-Ass killing his father (see the first Kick-Ass movie). 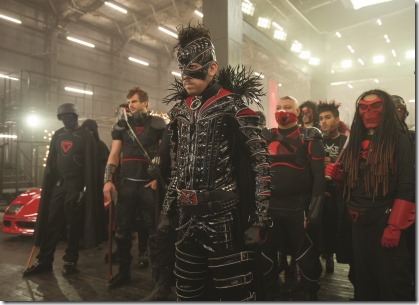 He gives his guys such truly obnoxious codenames – The Tumor, Genghis Carnage, Mother Russia, Apocalypse Meow, etc. – that his right hand man, Javier (John Leguizamo) tries to point out that they are racial stereotypes. ‘Archetypes,’ he snarls in response.

For most of the first two acts, Kick-Ass 2 clicks well enough that I thought it was going to work out pretty well. The real life superheroes/real life consequences, satirical thing was clicking and then… things got ugly. True, the events onscreen mirror the events of the comic pretty closely (though no dogs were killed, a head did roll – offscreen, thankfully), but the tone turned Punisher dark and when an attempted rape scene was played for laughs – and Mother Russia went on a cop-killing spree – the grit overtook the humor and the wit and charm of the first parts of the movie fell away.

Events swelled until, by the time the army of costumed heroes reached the final confrontation with the costumed villains, Kick-Ass 2 had devolved into some chaotic mess that only briefly showed any signs of being even the same movie as it was barely forty minutes before. 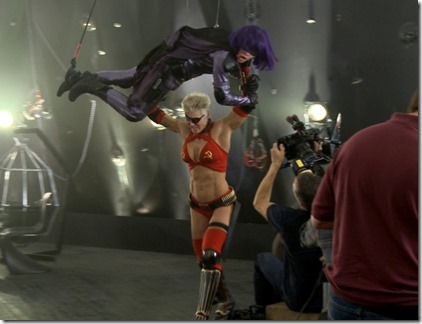 What makes things worse is that most of the cast who had any kind of substantive role in the proceedings were spot on. The chemistry between Taylor-Johnson and Moretz was terrific and Mintz-Plasse was almost perfect in his evil wussiness. Jim Carrey sparkled as Col. Stars & Stripes – it felt like he was really in the moment throughout and possibly inspired (some of his best lines had the feel of improv).

The fight choreography was almost ridiculously good, though, again, some of it was just too over-the-top. Somehow that worked for Hit-Girl but not anyone else – especially when she takes on Mother Russia in the final battle (one of the few bits where some spark shone through).

It’s a real shame that Kick-Ass 2 fumbled tonally. It took a sequel that could have been close to equalling its original and, just over its last third, dropped it over a cliff. Writer/Director Jeff Wadlow clearly meant well – and loved the material – but somewhere along the way, he got caught up in the details of the story and lost sight of the spirit of the original.

Am I glad I saw it? Yes, but not nearly as much as I was for the original.