Entertainment News for The Rest of Us
DEAN ROGERS
Television 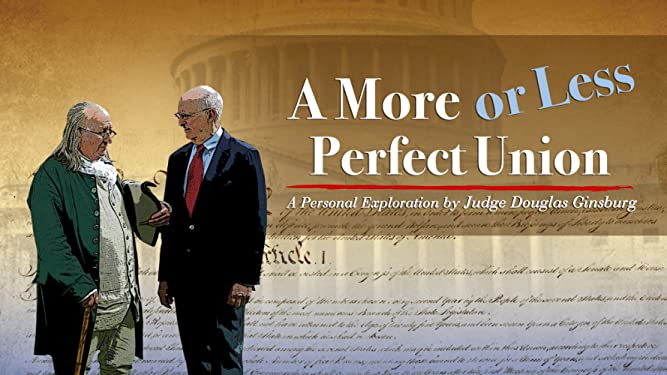 Welcome to the latest edition of THE INTERVUE! On today’s episode, let me ask a question. How much do you know about the U.S. Constitution?

In the upcoming three part documentary, A More or Less Perfect Union, A Personal Exploration by Douglas H. Ginsburg, explores the foundational document that governs those who govern us – the American Constitution. Hosted by Judge Douglas H. Ginsburg, a constitutional expert with 30 years of experience on the Federal Court of Appeals in Washington, DC, this thought-provoking, three-hour series looks at past, present, and future struggles for liberty through the lens of the U.S. Constitution. I recently had a amazing conversation with Judge Ginsburg to get a brief lesson of America’s defining document.

Judge Ginsburg, I read that you became interested in the project because the alarming lack of civics knowledge by the American public. According to a 2019 Annenberg Public Policy Center survey, 39% of the people could name all three branches of government. How does this documentary go into the Constitution directly?

Well, it is not a series of lectures and there are no talking heads. It is a program that is meant to inform and entertain so that people will stay with and become engage. We have a mixture of re-enactors of the framing of our Constitution with my commentary of course. We have some people who are telling their story about their interaction of that their ancestors with the government and the Supreme Court. Some very moving accounts by the African American families whose cases brought us horrible Supreme Court decisions saying that “Separate but Equal” was okay after the Constitution. It was an erroneous decision.

Then there are segments that illustrate the problems that arise when Congress received their powers with regards to the commons clause which authorize regulations of the interstate commerce but in fact it has become the regulation of everything. The Supreme Court has tolerated that. This story was told in reference to the cats that live in Ernest Hemingway’s historic home in Key West, FL. I had been told by the Department of Agriculture that the home has to be cared for by Federal Government standards even though those cats are born and will die in Key West. They aren’t going anywhere and there is nothing really interesting about them. When the suit was brought to resist this about the Hemingway House, the courses say “Well, you sell cat merchandise at your shop and on the internet, that’s enough connection to interstate commerce that you have to conform to USDA rules on how to raise a cat.” It’s really an absurdity but there it is.

It’s a true story and it illustrates how out of control the Federal Government has gotten in terms of what its limitations to the Constitution are.  People need to know what the limitations are because the Constitution is fundamentally the law that governs those who govern us. If we don’t know what those laws are, we are sitting ducks. We are unprepared to say “Hey, wait a minute. You can’t.” We need an educated public. A public that will stand up for its rights. I mean they have been slipping away for the last seventy to eighty years. It happens so slowly that people don’t noticed.

We’ve gone from a time that states required a license to pursue a particular profession for 5% of all the jobs that was in 1945 I believe. That’s now 25%, you need a license in one state at least to be a flower arranger. You need a license to be an interior space designer, not a decorator. you need a license to do hair braiding in some states. These are absurd intrusions on the liberties of the people. People accepted this are not aware that this is illegitimate and they have the right to stand up against it. Without civics education, we don’t know what our rights are and they will simply be gone in due course. This is a call to education and standing up for people’s rights.

I love how the series balance the story with re-enactors to having the great granddaughter of Dred & Harriett Scott to having your fellow judges talking about the Constitution.  Since you asked in the second episode “What do you think is the most important change, the most important amendment over the years to a couple” I would like you that very question

You know we’ve got the Bill of Rights as a package of ten amendments in 1789, just two years after the Constitution. So what’s in the first amendment is what most people know about the Constitution, they know that they have a Freedom of Speech. A player can say that you can’t speak here or you can’t say that on my property, what have you and the government cannot infringe on this. You know that they have the right of free speech. And maybe they know that have the right to practice their religion and peacefully assemble to petition government about their grievances.

Beyond that, most people have not read the Constitution and certainly people who have graduated from high school within the last fifteen years or so who never have been exposed to or look at the Constitution because of the lack of civics education. So, there’s a lot more to it than the first amendment. It’s terribly important I think that without the freedom of speech, all the others go away fairly quickly. Without the freedom of the press, we have no shield against the government for we don’t know what’s going on about the freedom of the press.

The first amendment is pretty clearly, in my consensus, is the most important. It’s terrible important for people to understand that the government is trisected in three different branches with three different responsibilities and powers in order to check each other and that system has bene degraded over the years. We now have the so called administrative or executive agencies that do all three things. They pass rules that have enforce law that is legislating. They enforce those rules that bring cases against violators. That’s the executive function of the prosecution. Then they sit as judges, the same people, and decide whether the citizen has violated their rules.

Now, the citizens can’t afford it and as of the luxury of time can seek a further appeal to a real court to challenge that but we are talking about a three-year saga and an enormous expense. James Madison, the architect of the Constitution said “The combination of those powers in one hand is the very definition of tyranny.” Who has those powers, all three of them? Every one of the alphabet agencies that we hear about: The Federal Trade Commission, The Securities & Exchange Commission, any number of them here in Washington and none of them conforms to the separation of power. The Supreme Courts says “Well, its close enough. It will go to court eventually.”

So here we have the original most feature of the original Constitution, the separation of powers which gets totally diluted.

Are there any laws or rulings that he feels legally may have come sooner or shouldn’t be necessary?

In the 1890s that’s when the Supreme Court said that they upheld the Louisiana Withdraw Car Act that said “people of different races had the ride in separate cars on a train” and that was ok because the Constitution said that equal protection of the laws but separate but equal is still equal. Of course, that’s absurd and we all know that’s absurd. Separate is inherently not equal and we lived for the 1890s of legally until the 1960s with the notion that people could be segregated by race consistent with the equal protection clause of the Constitution. A tragic, tragic ruling that never should have been tolerated. It was pretty contrary to the 14th Amendment which had extended to the states the obligation to treat everyone equally under the law.

In the final episode, you discussed how the Constitution is under pressure today, and how all three governmental branches have contributed to the problem. What do you feel is the greatest problem that the branches brought to the pressure?

I feel that the pressure, right now, on the Constitution – the most obvious is danger of free speech. College campuses, in particular where free speech is extremely important and highly valued, are under great pressure, self-imposed pressure often to censor and limit what people can say. This is perfectly legitimate in a private college that doesn’t get any money from the federal government but at least at public college an maybe at a private college that does get money from the government has an obligation to abide by the first amendment because the public ones are part of the government. To impose censorship on what faculty members can teach or can say or even on students by saying that there are “Safe zones” where we can’t say certain things or anything perhaps is completely inconsistent with the First Amendment to the Constitution with the rights of those faculty members and those students to give free speech in a public forum like a public university. This is extremely important because without the First Amendment, the rest of the amendments like the rest of our liberties go down like bowling pins.

With A More or Less Perfect Union coming to Public Television Stations, what do you hope the audience will take away from watching the series?

I hope that everyone who watches the series will at the very least say that “You know, I ought to read the Constitution“ as I suggest in the show. I mean its four large pieces of parchment paper, it’s not that long to read and its meant to be understood by the public. Your lawyer understands your mortgage and your deed but this is meant for the public to understand. It is important for people to actually look at it and actually read it.

A More or Less Perfect Union, A Personal Exploration by Douglas H. Ginsburg arrives on local Public Television Stations this Sunday, September 13th and on Amazon Prime. To go along with the series, check out the companion book, Voices of Our Republic: Exploring the Constitution wherever books are sold