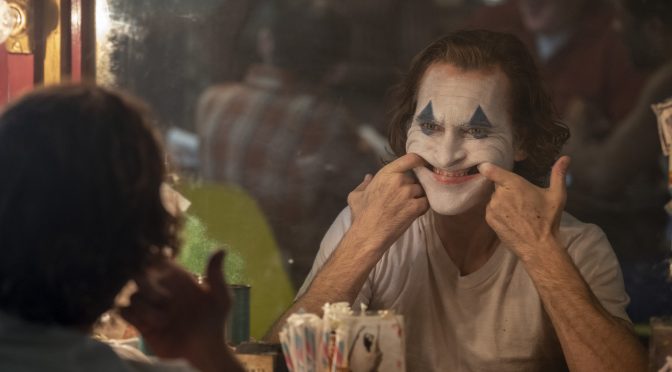 Todd Phillip’s take on DC’s most iconic villain is a ground level, if-it-happened-in-the real-world-it-might-look-like-this, take on the Clown Prince of Crime.

What you need to know: Joker is as relentlessly grim as Taxi Driver or Mean Streets – darker than dark but curiously compelling.

Leaning heavily on the early films of Martin Scorsese as influences, Phillips sets Joker in a Gotham City on the verge of collapse – there’s a garbage strike and the city’s summer heat is making the mountains of trash in the alleys and on city sidewalks reek, and the home to an ever increasing population of rats.

There’s a scene that calls to mind Berhnard Goetz, who shot three men in a subway car because he was afraid that they were going to hurt him – and became something of a folk hero.

In this dumpster fire of city, Arthur Fleck (Joaquin Phoenix) is working a low paying job as a party clown. He entertains children in hospital and twirls a sign in front of a store that’s going out of business.

He lives with his mother, Penny (Frances Conroy) who responds to his goal to become a stand-up comic with, ‘But don’t you have to be funny to be comedian?’

Worse, he has a Tourette’s-like ‘condition’ that makes him laugh when stressed – a groan filtered through a cackle – and puts him in some very dodgy spots.

Arthur dreams of being a guest on The Murray Franklin show – a late night talk show whose host (Robert DeNiro) channels the worst of Johnny Carson – but when he gets there it is not the way he’d always wanted.

Even his encounters with his sweet neighbor and single mom, Sophie Dumont (Zazie Beetz), give scant relief from the film’s darkness.

This is a world where Thomas Wayne (Brett Cullen) is a rich jerk; Bruce Wayne (Dante Pereira-Olson) is a dour little boy, and absolutely no one gives two $#!+s about anyone but themselves.

Phillips’ film is so grim that even the one or two scenes shot under blue skies seem so grey that not only does the appearance of Arkham Asylum comes as no surprise, it’s almost a relief. (Its connection to Arthur is not what you’re expecting – Phillip’s Joker does contain some very interesting surprises.)

Despite the grimdark tone of the film – even its few genuinely funny bits will make audiences feel a bit uncomfortable about their laughter – Arthur’s journey does, at a few points, elicit genuine sympathy – which he then shrugs off by doing something unwonderful.

And, for what it’s worth, Phoenix’s Joker is probably the closest we’ll ever get to seeing the rail thin comics character in a live-action film – and Phoenix is genuinely emaciated in the role.

Joker’s cinematography makes the events that unfold before us crystal clear – even though it’s mostly shot at night.

The sequence of events that lead to Arthur becoming the Joker are stunningly close to the origins of psychopathic or sociopathic killers in the real work – close enough that the entire film leaves us unnerved.

Joker is exceedingly well made – and Phoenix is superb as Arthur Fleck/Joker – but Joker is a film that will be appreciated much more than it will be enjoyed.