In collaboration with The Blackhouse Foundation, an Institute Associate of the Sundance Film Festival, to present “The Making of WGN America’s ‘Underground,’” on Saturday, January 23 at 7:00 p.m. in Park City, Utah.  Scheduled to take place at Blackhouse’s Sundance headquarters located at the Buona Vita Restaurant, 804 Main Street, Park City, the exclusive “clips and conversation” panel event will feature “Underground” executive producer John Legend, along with the cast and creative team from the hotly anticipated escape thriller set to premiere Wednesday, March 9 (10:00 p.m. ET/PT) on WGN America.  Following the panel, WGN America and John Legend will host an “Underground” party, featuring the series’ stars and producers, at David Beavis Gallery, 314 Main St., Park City.

“Independent spirit is at the heart of both ‘Underground’ and the Sundance Film Festival, and we are thrilled to be partnering with Blackhouse to bring the dynamic world of ‘Underground’ and the artists who created it together with the festival community which supports provocative, authentic voices,” said Matt Cherniss, President and General Manager, WGN America and Tribune Studios. 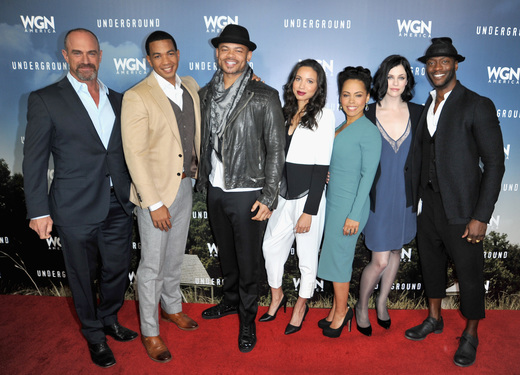 “WGN America’s ‘Underground’ is the perfect realization of the dream of Blackhouse – expanding distribution platforms to create opportunities for a new generation of storytellers to reflect our histories and lives in ways the entertainment industry didn’t even think was possible,” said Diamond.

“Underground” follows a group of courageous men and women who use their ingenuity, power and perseverance to attempt the greatest escape in history and break free, despite the dire consequences that awaited them on the other side.  The story follows a courageous blacksmith Noah (Aldis Hodge) who covertly organizes a small group of his fellow slaves and pieces together a daring plan of escape across hundreds of miles to freedom.  The odds of success are razor-thin for those who make it off the plantation, while the risks, dangers and obstacles multiply each step of the way.